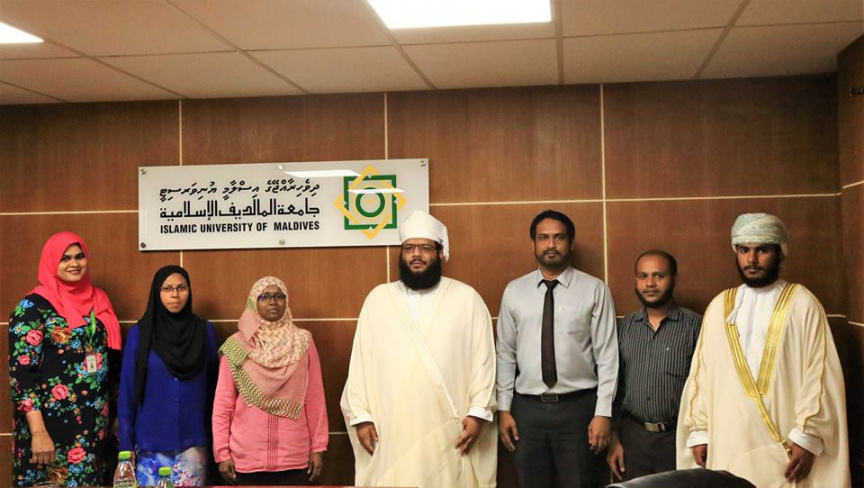 The government of Oman and Islamic University of Maldives (IUM) has discussed extending the support of universities in Oman to IUM.

The discussions were held between Vice Chancellor of IUM, Dr. Aishath Khaleela Abdul Sattar and Ismail Bin Nasir Bin Saeed Al A’ufee, the Director General of International Cooperation at the Office of Minister of Islamic Affairs and Endowment of Oman.

During the call, Al A’ufee and Dr. Aishath Khaleela discussed allowing IUM students studying Arab language courses to partake in similar courses in Oman, and allowing lecturers at IUM to partake in enrichment and training programs in universities in Oman.

They also discussed holding an annual conference to promote exchange of culture and history between Maldives and Oman which will be a collaboration between IUM and educational institutions of Oman.

Dr. Aishath Khaleela, during the call, also extended the invitation to Oman to partake in international symposiums held by IUM.

Both Al A’ufee and Dr. Aishath Khaleela highlighted on the shared historic ties between Maldives and Oman.

Dr. Aishath Khaleela said she read about the discovery of money used during Sultan Mohamed Thakurufaan being discovered within a cache of ancient currency discovered from the shores of Oman during her studies in UAE.

Meanwhile, Al A’ufee said he had been informed of the existence of Maldivian families who were descendants of ancient travelers from Oman, and found a document supporting the stories during his visit to the Dhivehi Bahuge Academy.

He also noted that Al-Sayyid Mohamed Saahibul Mirbaath – an ancestor of a group of well-respected Maldivan families is buried in Mirbat, Oman.

He also highlighted on the historic reports of the first Maldivian Sultan who embraced Islam being buried in Oman after he passed away during his return journey from Hajj pilgrimage in Saudi Arabia.

Al A’ufee said that Oman is the geographically closest country in the Arabian Peninsula to Maldives, and was a pit stop for ancient travelers from Oman.

He noted that ties between Maldives and Oman had originated from trade, and stressed the importance of strengthening trade and economic ties between the two countries in modern times.

Al A’ufee has visited Maldives before return to Oman upon conclusion of a conference in Kerela, India.