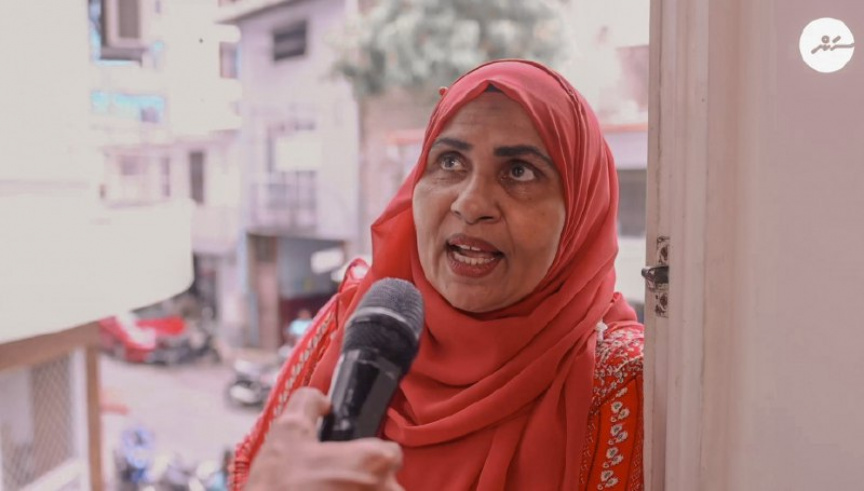 It was around 12:30 am. Haleemath Ibrahim, who lives in M. Ajameepool, which neighbors Nirufehi, woke up to a loud noise. She ignored the noise and tried to get back to sleep. Sounds of construction work are a common nuisance in Male’, even at night. That must be it, she thought.

She heard a loud noise again. But she thought nothing of it.

And then she heard the sound of children screaming.

She rushed to her window and saw neighboring Nirufehi on fire.

“I rushed outside. I was outside when I heard a large explosion,” she said.

“I saw the dead bodies getting carried out. They brought out another dead body when I went out [to the balcony] after Fajr prayer,” she said.

When she went out for a closer look, she met a young woman, who was pleading with the crowd to rescue the people trapped inside.

“She said a young child was trapped there. She was running around in fear, pleading to rescue the child,” said Haleemath.

Haleemath said migrant workers there were telling the crowd that their friends were trapped there.

But the crowd could not do much to help due to the high police security there, she said.

Once the fire was put out, Haleemath saw firefighters bring out more victims from the building in body bags, covered with a cloth.

“It was terrifying. Everyone was running around in fear,” she said.

The fire broke out in a car repair garage in Nirufehi, located near the Maaveyo Mosque, around 12:30 am. The garage is located on the ground floor, while the first-floor houses cramped living quarters for migrant workers – the only ventilation – a single window.

Hisan said 19 of them had been taken away by their employers.

According to Maldives National Defense Force (MNDF), the migrant quarters housed at least 38 people, and there were cooking gas cylinders placed next to each bed.

It marks the third fire in the garage.

Missing men: One accused of killing the other