38 migrants cramped in one place; gas cylinder next to each bed 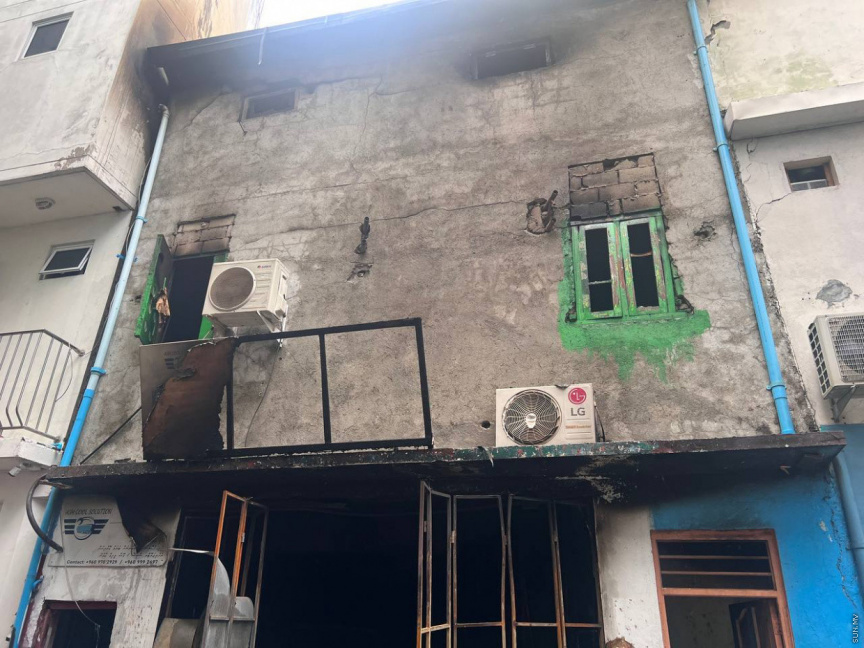 There were 38 migrants living in an apartment on the building in Maafannu district where a fire broke out early Thursday, with a gas cylinder next to each bed, states Maldives National Defense Force (MNDF).

In a press conference outside the building Thursday morning, Maldives National Disaster Authority (MNDA)’s CEO Hisan Hassan said 28 people rescued from the building had been moved to safe locations.

Hisan said 19 of them had been taken away by their employers.

Colonel Ibrahim Rasheed, Commandant, MNDF Fire and Rescue Service said there were gas cylinders placed next to beds inside the migrant quarters.

“Therefore, [we have been informed] there were gas cylinders placed next to practically each bed,” he said.

Ibrahim said firefighters arrived at the scene in three minutes.

“The fire had already spread extensively when we arrived at the scene. The first priority of our firefighters was to control the fire and prevent it from spreading any further,” he said.

Ibrahim said firefighters had worked to prevent the fire from spreading to neighboring residences.

“There were a lot of gas cylinders here. Different types of gas. The garage was located on the ground floor. We therefore found it very challenging to fight the fire,” he said.

“We began search and rescue operations as soon as the fire was controlled. We have found 10 dead bodies so far,” he said.

Ibrahim said the dead bodies recovered from the scene were severely burnt, making it difficult to identify them or even determine their sex.

Ibrahim said the garage had been the scene of a previous fire – which resulted from negligence while working with gas cutters.

“This place stores many cylinders. Some cylinders as tall as me,” he said.