With forced removal of banners, ‘India Out’ graffitied outside homes 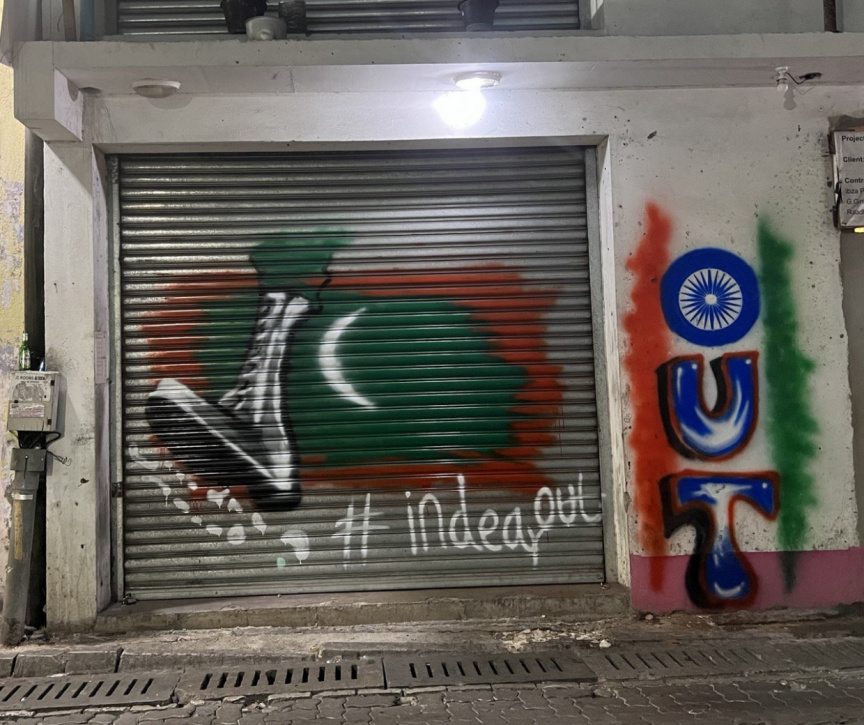 'India Out' graffiti outside of a house in Male' City. (Sun Photo)

Supporters of the ‘India Out’ campaign has begun graffiting spelling altered ‘India Out’ messages outside homes.

In this regard, ‘In Dear Out’, a play on the words ‘India Out’ has been graffitied at G. Green Beans, a house situated at Rahdhebai Hingun.

The graffiti drawn on a garage door depict the Maldivian flag, alongside a map of Maldives that is being trampled on by a shoe. Next to the garage door on the wall, is a reference to the Indian flag, with ‘out’ written in its middle.

‘India Out’ is a campaign led by the opposition coalition in protest of Indian military presence in the Maldives.

Subsequently, huge banners with ‘India Out’ written in bold letters were hung at former President Abdulla Yameen Abdul Gayyoom’s house, H. Dhoovehi, and PPM headquarters, located in H. Hurafa, were both forcibly removed by Police after entering the buildings with court orders.

Spelling altered ‘India Out’ banners placed on later, which read ‘In Dear Out’ were also removed.

Opposition coalition has filed a case at the Civil Court, to nullify the President’s decree, citing it to be unlawful.