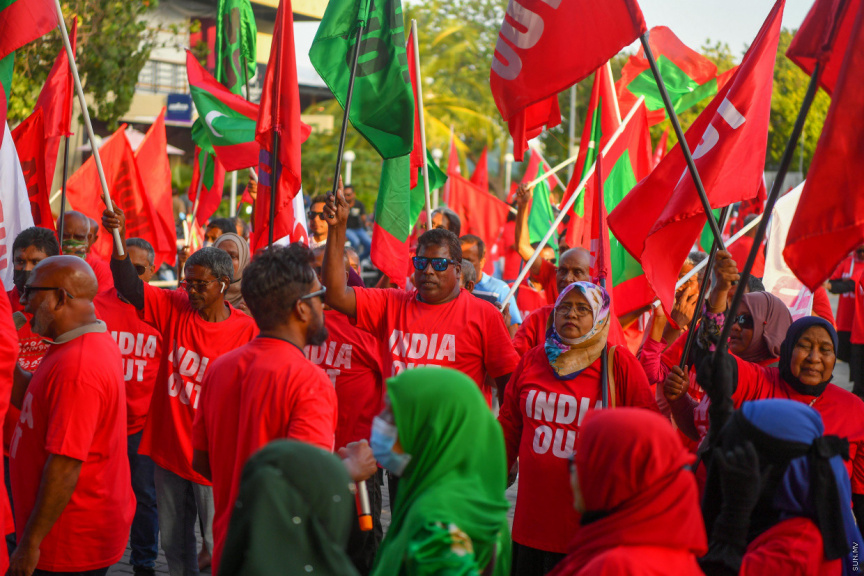 Protestors carry flags during an 'India Out' rally in Male' City. (Sun Photo)

President Ibrahim Mohamed Solih issued a decree on Thursday, ordering a halt to the ‘India Out’ campaign led by the opposition to protest against Indian military presence in Maldives.

The president, in his decree, titled ‘Stopping Planned Activities to Incite Hatred Towards Specific Countries Under Various Slogans, said the National Security Council had decided the ‘India Out’ campaign posed a threat to national security.

The council decided that political campaigns targeting a specific country posed a threat to national security, and that activities that incite hatred towards specific countries must be stopped by security forces.

The president said that though his administration’s policy was to allow freedom of speech and freedom of assembly to the full extent possible, the ‘India Out’ campaign was conducted by taking undue advantage of the policy, and with the purpose of violating the peace and security in Maldives.

He also said that the campaign was a deliberate attempt to hinder the longstanding relations between Maldives and India, and international efforts to maintain security in the region.

The president said the ‘India Out’ campaign put Maldives at risk of loss of peace and stability, huge economic and social burden, and isolation in the international arena.

“I, under the powers and responsibilities vested in me under Article 115 (c), (d), and (e) of the Maldivian Constitution, therefore issue this decree to stop such aforementioned activities and order all state institutions to enforce it,” declared the president.

Prior to the issuance of the decree, police issued a statement on Wednesday, ordering the removal of all ‘India Out’ banners hanging from buildings in the capital.

Police stormed the opposition PPM headquarters and the residence of opposition leader, former president Abdulla Yameen Abdul Gayoom on Thursday to remove ‘India Out’ banners hanging from the buildings.