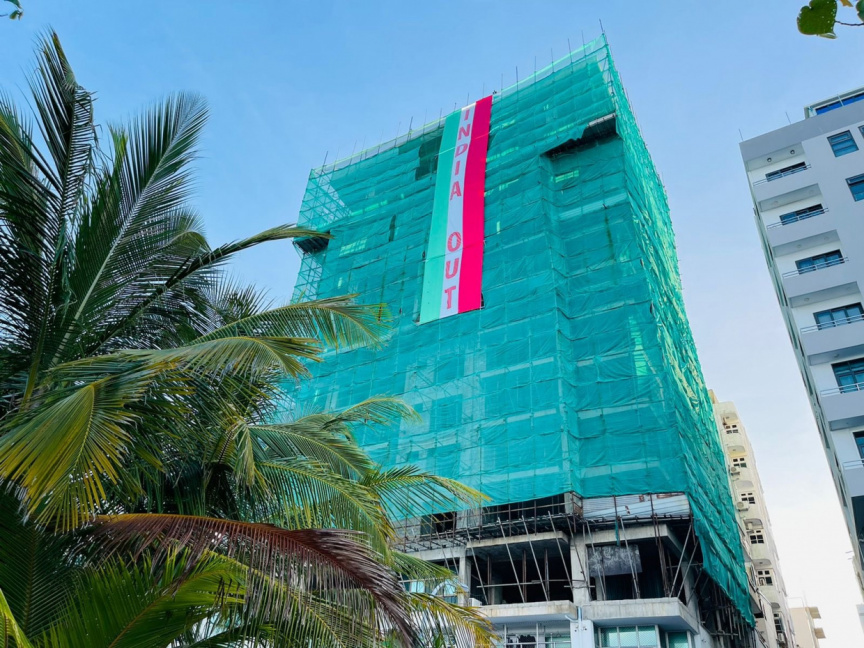 Banner spelling 'India Out' hung from a building in Male' City.

As part of the Opposition Coalition’s campaign against the presence of the Indian military in Maldives, member parties PPM and PNC have been working t hang large banners reading ‘India Out’ from buildings in Male’ City.

Currently, such banners have been put up outside the PPM head office, as well as the residence of former President and PPM leader Abdulla Yameen Abdul Gayoom, H.Dhoovehi.

In a statement released by Police regarding the matter, it was noted that hanging banners on full display to the public, with phrases targeting a certain country, was an act of denigration.

Additionally, Police expressed their belief that such acts tarnish international relations of Maldives as well as the diplomatic and cultural ties with countries, and in turn negatively impact locals who live in those countries and those visiting Maldives as well.

Hence, the statement further noted that as the authority tasked with maintaining peace and harmony and preventing all action that takes away from that, they call to remove those.

The Police statement comes at a time when former President and current Speaker of the Parliament Mohamed Nasheed expressed displeasure over the banners and said that the Police need to immediately remove those hanging from Yameen’s residence.