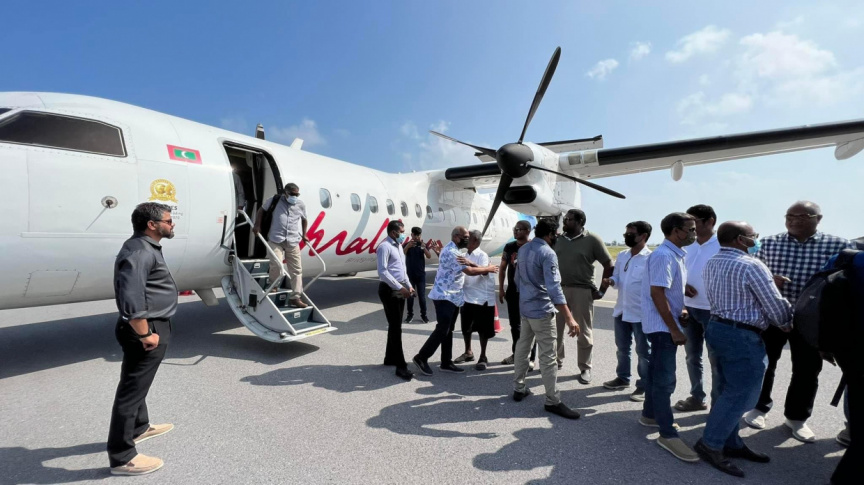 The demand for flights operated from the Madivaru Airport in Lh. Atoll, opened last February, remains low due to the high ticket fare.

An airport employee, who spoke to Sun on condition of anonymity, said that the daily flights sometimes carried just three passengers.

The number of passengers on a good day reaches no higher than 20, said the employee.

President Ibrahim Mohamed Solih, during his trip to Lh. Atoll to open the airport in February, said the government would negotiate with Island Aviation, which operates Maldivian, to reduce the ticket fare.

“Though I am unable to share specifics with you standing here today, God willing, I will negotiate with Island Aviation and work to provide a good and swift solution to this,” said President Solih, during his visit to Naifaru.

Rasheed told Sun the Naifaru Council has received no update regarding the issue of ticket fare.

Lh. Atoll is home to multiple tourist resorts. However, the airport has yet to finalize an agreement with any of the resorts.

Island Aviation’s spokesperson told Sun that the company was engaged in negotiations to secure agreements, and would work to provide a swift solution to ticket fare and other concerns.

He said that it was too soon to conclude there was low demand for Madivaru flights, and that the company hoped for the situation to improve in the future.

The airport, developed by Kuredu Holdings, was handed over to Island Aviation in January.

Maldivian government signed the agreement with Kuredu Holding to develop the airport in May 2021. Kuredu Holding and Crown and Champa Resorts operate the largest number of resorts in Lh. Atoll.