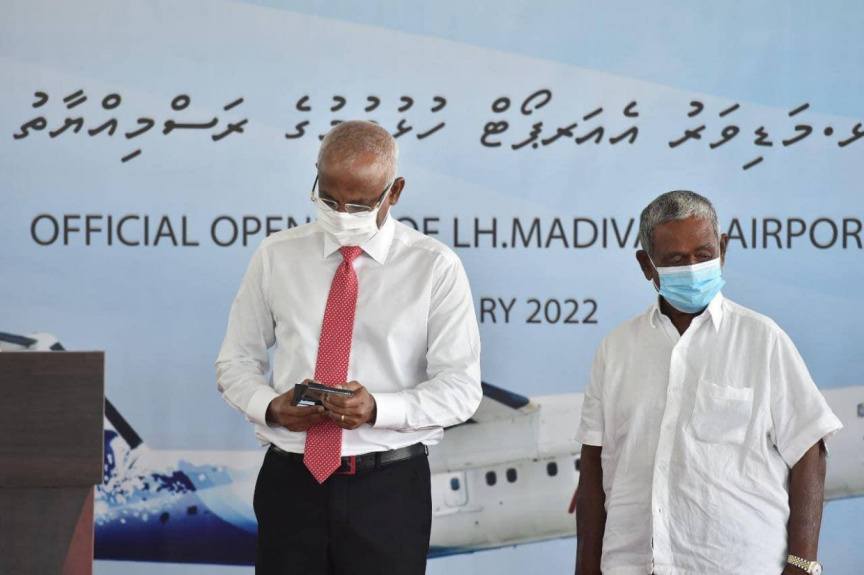 President Solih had traveled to Lhaviyani atoll today, for the inauguration ceremony. He became the first traveler to Madivaru Airport.

Speaking at the ceremony, President Solih said that today is a very joyous occasion for Lhaviyani Atoll residents.

“As an individual from Lhaviyani Atoll, in the capacity of someone who was born to the atoll, this brings me much happiness as well. A dream the residents of this atoll has been hoping for a really long time, has come true today,” he had said.

On this note, President Solih said that Crown and Champa Company is a company that has played a significant role in the development of Maldivian health and education sectors in addition to the tourism industry.

He also noted that Kuredhu Holdings prioritized the development of Madivaru Airport during the COVID-19 pandemic, and had completed the work to perfection.

“Even though this airport remains as a domestic airport today, Uchu’s vision is to further expand this place and turn it to an international airport. This has been discussed with me,” he had said.

He noted that the matter had been discussed with Maldives Transport and Contracting Company (MTCC) as well. However, work on the project has not yet been able to commence due to MTCC’s work load.

The government awarded the development of Madivaru Airport to Kuredu Holdings in last year May. Following completion of the project, the company handed over the airport to Island Aviation last month.

“Due to the employment opportunities created with the opening of this airport, Lhaviyani Atoll residents will directly benefit of MVR 7 million per year, as income,” he had said.

Mihadh also said that when the airport is brought to use, it will increase the role Lhaviyani Atoll plays in the development of Maldivian economy.

National airline, Maldivian, has announced that they will be commending Madivaru Airport operations on next Sunday. The starting price for a one-way ticket is MVR 1,029.

Motorbike of police who stopped a drug dealer torched