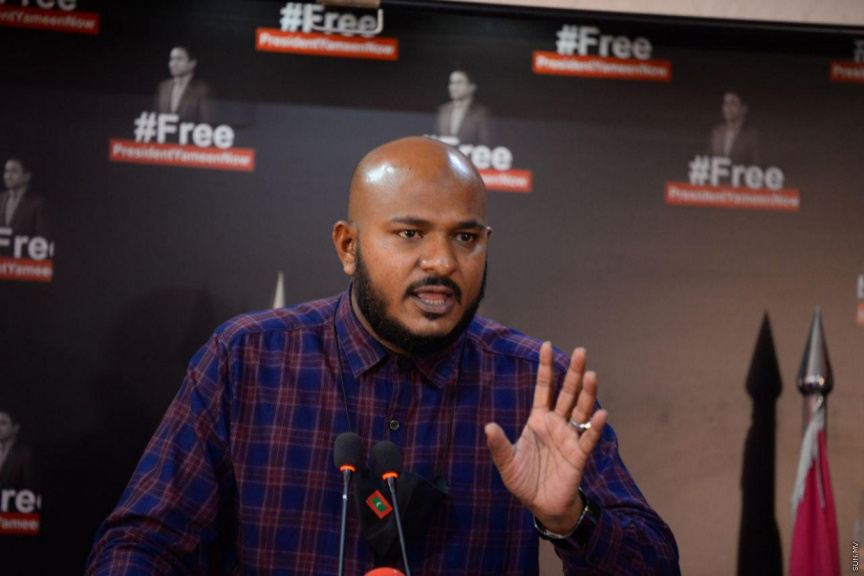 The opposition coalition on Monday alleged that weapons were smuggled into Maldives via the Cochin-Hanimaadhoo ferry route.

Speaking at a gathering held by the opposition in Male', the Vice President of People's National Congress (PNC) and the Council Member of Male' CIty Hulhumale Constituency Ibrahim Shuja said that although the government claimed that the ferry route between Cochin and Hanimaadhoo would bring in advantages to the north, that was not what happened.

"Cochin ferry did not bring any advantages to the people. That was used to smuggle weapons and the Indian Military into Hanimaathoo.

Shuja reiterated the opposition's stance that the 'India Out' campaign was not targeted at the people of India, and that it was against Indian military presence in Maldives.

Additionally, he maintained that there is no issue with Indian nationals working as teachers and doctors, but they aim to build up locals for those jobs as well.

"So at some point, the Indian government will say that they can no longer send doctors or teachers to Maldives. By the grace of God, we will train doctors and teachers in this country. That is President Yameen's vision."

Maldives National Defence Force (MNDF) has yet to make a statement in relation to the statements made by the opposition coalition comprising of People's National Congress (PNC) and Progressive Party of Maldives (PPM).

Addressing the gathering Mahibadhoo MP Ahmed Thoriq said that the ruling in September 2018 by the Supreme Court also had Indian backing. He also alleged that the Indian Military is present in other island nations in the Indian Ocean.

"In this Indian Ocean, especially in strategic locations such as Seychelles and Mauritius have Indian influence. They have worked on creating military bases in these locations."

The ‘India Out’ campaign spearheaded by the opposition leader, former President Abdulla Yameen Abdul Gayoom, – calls for the removal of Indian military personnel stationed in the Maldives. A lot of individuals have been raising voices in support of the campaign, via social media and other means.