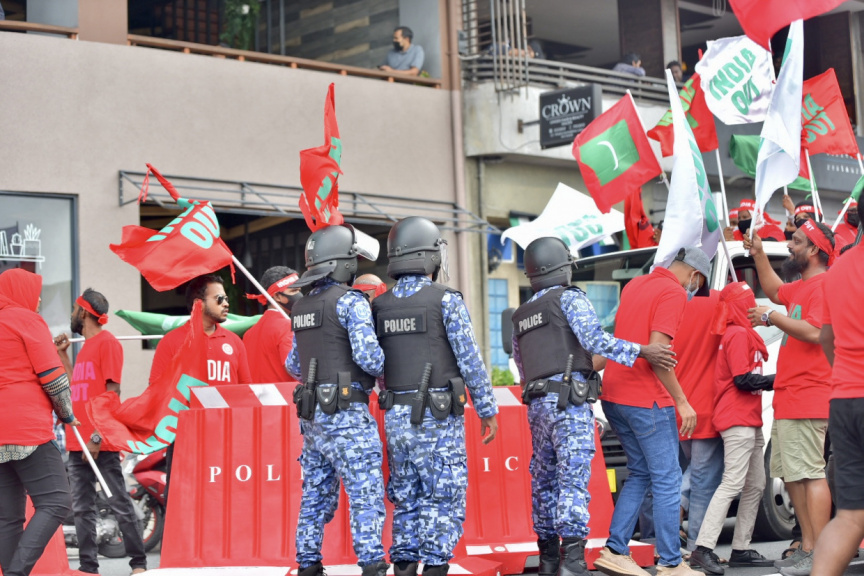 The opposition coalition expressed disbelief at recent claims of harassing teachers and other Indian nationals in islands and accused the government of trying to find further excuses to bring in more Indian military to Maldives.

The government and the opposition are at a standoff due to the latter's campaign against the presence of the Indian military in Maldives.

On Sunday, the Ministry of Education voiced concern over cases being submitted regarding the harassment of Indian teachers working at island schools on the streets, as the opposition coalition strengthens their ‘India Out’ campaign across the country.

Education Ministry’s Permanent Secretary Ahmed Ali told Sun today that two cases, from two islands, of Indian teachers being harassed on the streets by groups, calling ‘India Out’ at them, have been brought to the attention of the Ministry.

When questioned by 'Sun' regarding this, PNC's President Abdul Raheem Abdulla said that he does not believe the government.

Abdul Raheem went on to say that the government wants to spread the narrative that there Indians in Maldives are in danger in order to bring in more Indian Military under the guise of protecting them.

"The government is trying to create a scene," said the PNC leader.

Furthermore, he said that the sole purpose of the 'India Out' campaign was to make the Indian military in the country leave and that they have never encouraged targeting Indian nationals.

"Indian teachers, doctors and nurses are not related to this. We are not against them."

The ‘India Out’ campaign spearheaded by the opposition leader, former President Abdulla Yameen Abdul Gayyoom, – calls for the removal of Indian military personnel stationed in the Maldives. A lot of individuals have been raising voices in support of the campaign, via social media and other means.

10 arrested in protest advocating for fishermen