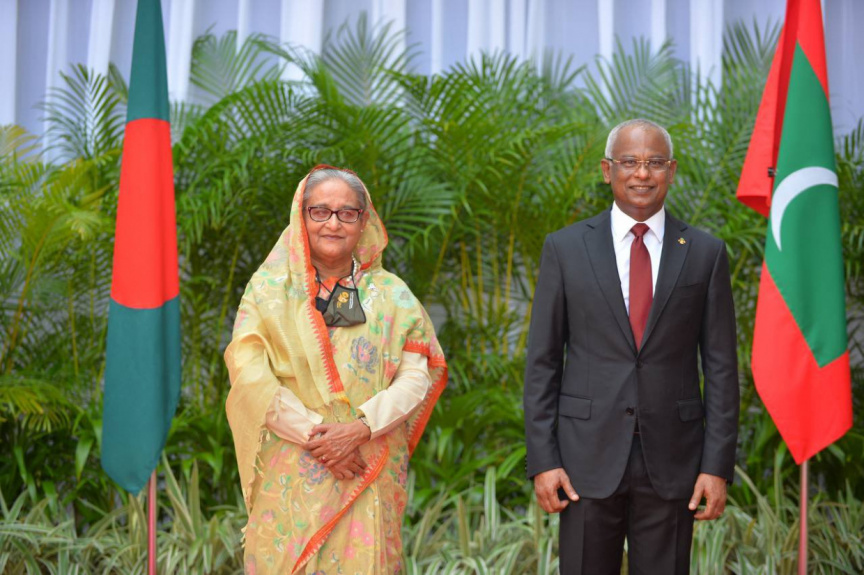 Bangladeshi Prime Minister Sheikh Hasina has commenced her holidays in the Maldives – following the conclusion of the official segment of her trip to the country.

Prime Minister Hasina arrived in Maldives on Wednesday, in response to an invitation extended by President Ibrahim Mohamed Solih.

Sun has been informed that following the conclusion of the official segment of her trip to the Maldives – she is currently holidaying in the country. She will conclude her visit and depart to Bangladesh on next Monday.

The official segment of Prime Minister Hasina’s trip to the Maldives saw by official bilateral talks between the two countries in areas of mutual interest including health, education, sports and human resources development. This meeting took place between President Solih and Prime Minister Hasina who were accompanied by a high-level delegation from their respective governments.

Establishment of a direct shipping line between Bangladesh and Maldives was also discussed during the meeting. Prime Minister Hasina also highlighted the Bangladeshi government’s decision to resume issuance of on-arrival visa for Maldivians.

After concluding the talks, four agreements between two countries were signed. The existing Memorandum of Understanding on Recruitment of Qualified Health Professionals between Bangladesh and the Maldives was renewed.

Apart from the agreement exchange, the symbolic handover of keys to the 13 military vehicles donated by Bangladesh to the Maldives took place as well.