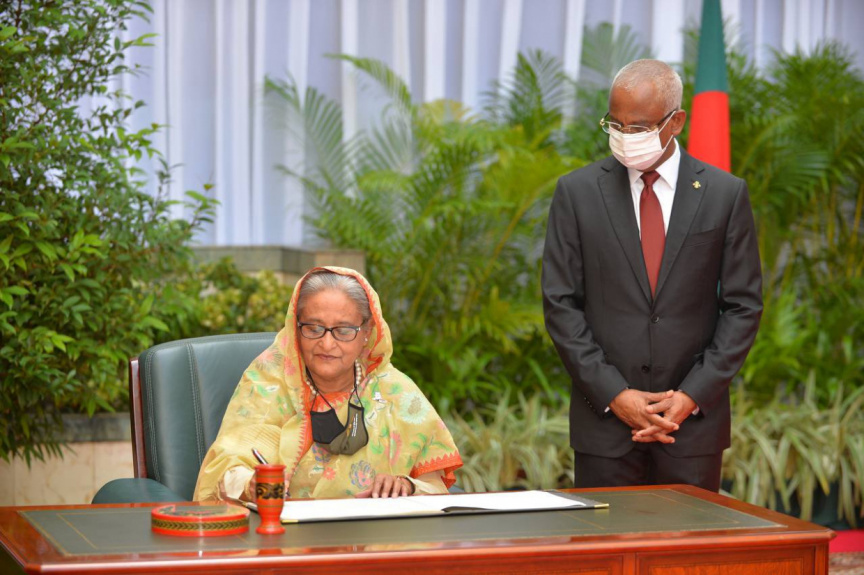 Bangladeshi Prime Minister Sheikh Hasina and President Ibrahim Mohamed Solih, on Thursday, has discussed the establishment of a direct shipping line between Bangladesh and Maldives.

Prime Minister Hasina who arrived in the Maldives yesterday – met with President Ibrahim Mohamed Solih at the President’s Office today. During this meeting, both leaders discussed areas of mutual interest including health, education, sports and human resources development.

Speaking at a joint press conference held following their meeting – Prime Minister Hasina said that she and President Solih discussed further enhancing collaboration between the two countries in the areas of commerce and investment.

Noting the commencement of operations to Maldives by one of the biggest private airlines in Bangladesh, US-Bangla – she said this has strengthened relations between both countries in the context of civil aviation.

“The flag carrier of Bangladesh, Biman Bangladesh is also discussing to commence operations between Dhaka and Maldives,” she added.

Prime Minister Hasina said that she hopes this enhances people-to-people connection between the two nations and urge more cooperation between the nations in the field of tourism.

“We did also discuss the opportunities there are to establish a direct shipping line,” she also noted.

However, she did not give any further details on the topic.

Speaking further, Prime Minister Hasina said that with the increase of production in Bangladesh, the country will be providing quality products to Maldives at the same price as their competitors.

She also revealed the Bangladeshi government’s decision to resume issuance of on-arrival visa for Maldivians.

Prime Minister Hasina arrived in the Maldives yesterday. She was received at Velana International Airport by State Minister for Foreign Affairs Ahmed Khaleel.

She arrived to the Maldivian capital, Male’ City, earlier this morning – after having stayed overnight at a resort following her arrival to the Maldives yesterday.

President Solih and Prime Minister Hasina were accompanied by a high-level delegation from their respective governments during this meeting.

After concluding the talks, four agreements between two countries were signed. The existing Memorandum of Understanding on Recruitment of Qualified Health Professionals between Bangladesh and the Maldives was renewed.

Apart from the agreement exchange, the symbolic handover of keys to the 13 military vehicles donated by Bangladesh to the Maldives took place as well.

The Prime Minister will conclude her visit and depart to Bangladesh on next Monday.