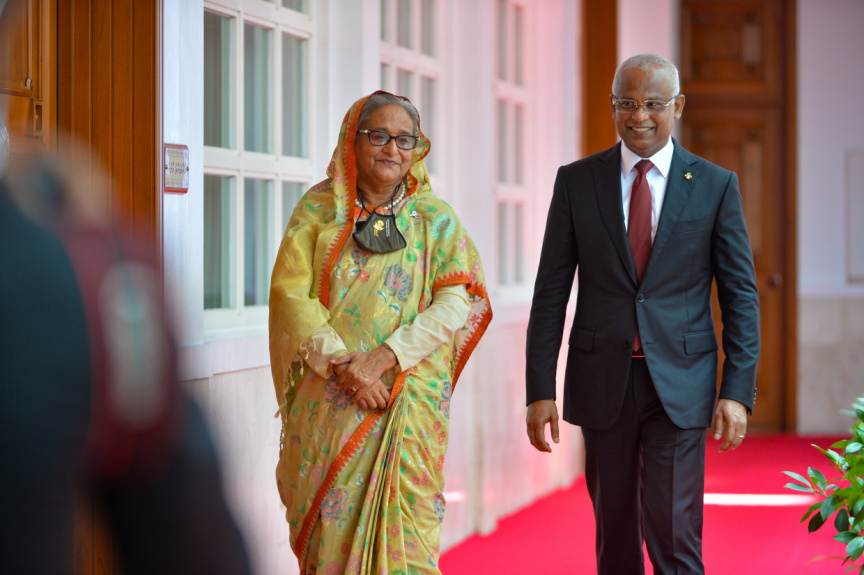 President Ibrahim Mohamed Solih and Prime Minister of Bangladesh Sheikh Hasina during her visit to Maldives on December 23, 2021. (Photo/President's Office)

Four key agreements were exchanged between Maldives and Bangladesh as a sign of progressing bilateral relations.

President Ibrahim Mohamed Solih and Prime Minister of Bangladesh Sheikh Hasina presided over the ceremony held to exchange the agreements at the President’s Office.

This agreement was exchanged by the Maldivian Minister of Youth, Sports, and Community Empowerment, Ahmed Mahloof, and Bangladeshi Foreign Secretary Masud Bin Momen.

4. The Agreement between Maldives and Bangladesh for the Elimination of Double Taxation with Respect to the Taxes on Income and the Prevention of Tax Evasion and Avoidance.

The agreement was exchanged by the Commissioner-General of Taxation of the Maldives Inland Revenue Authority (MIRA), Fathuhulla Jameel, and the Chairman of the National Board of Revenue of Bangladesh, Abu Hena Md. Rahmatul Muneem.

In addition to the agreements, a symbolic handover of keys to the 13 military vehicles donated to Maldives by Bangladesh took place. The exchange took place between Maldivian Chief of Defense Force Major General Abdulla Shamaal and General S. M. Shafiuddin Ahmed, the Chief of Army Staff of Bangladesh.

Later today, she is scheduled to deliver an address at the Maldivian Parliament. She will also be meeting Bangladeshis residing in the Maldives virtually.

The Prime Minister is currently in Maldives on an official visit at the invitation of President Solih. She arrived along with her delegation on Wednesday, 22 December, and will conclude her visit and depart to Bangladesh next Monday.