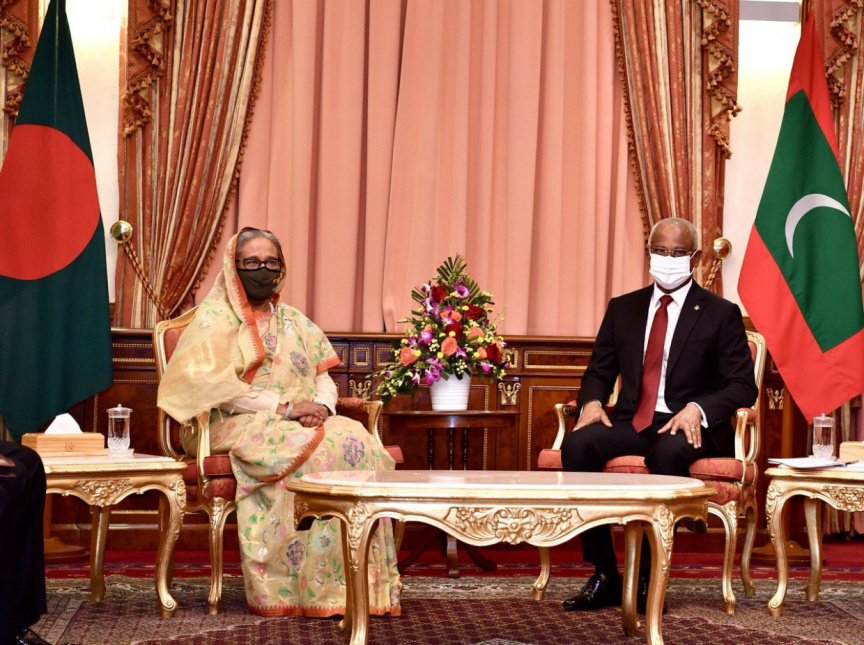 President Ibrahim Mohamed Solih has met with Bangladeshi Prime Minister Sheikh Hasina, who arrived in Maldives yesterday, at the President’s Office. At this meeting, bilateral talks pertaining to Maldives and Bangladesh were executed.

Prime Minister Hasina arrived to the Maldivian capital, Male’ City, earlier this morning – after having stayed overnight at a resort following her arrival to the Maldives yesterday.

Upon her arrival at Male’, she was received at the Presidential Jetty by President Solih. Following the welcoming courtesies, Prime Minister was escorted to the President's Office by a cultural procession.

At the President’s Office restricted talks between President Solih and Prime Minister Hasina – after which official talks took place between the two countries.

President Solih and Prime Minister Hasina were accompanied by a high-level delegation from their respective governments during this meeting.

In addition to this, four agreements are set to be signed between both countries during this visit. They include Agreement on Avoidance of Double Taxation and Prevention of Fiscal Evasion with respect to Taxes on Income, Agreement on the Transfer of Prisoners, Memorandum of Understanding in in the areas of Health Care and Medical Sciences between Bangladesh and Maldives and Memorandum of Understanding between Bangladesh and Maldives on Cooperation in the Area of youth and Sports Development.

The existing Memorandum of Understanding on Recruitment of Qualified Health Professionals between Bangladesh and the Maldives will be renewed.

Later today, she is scheduled to deliver an address at the Maldivian Parliament. She will also be meeting Bangladeshis residing in the Maldives virtually.

The Prime Minister will conclude her visit and depart to Bangladesh on next Monday.