President: We have found new ways to increase Maldives-Bangladesh cooperation 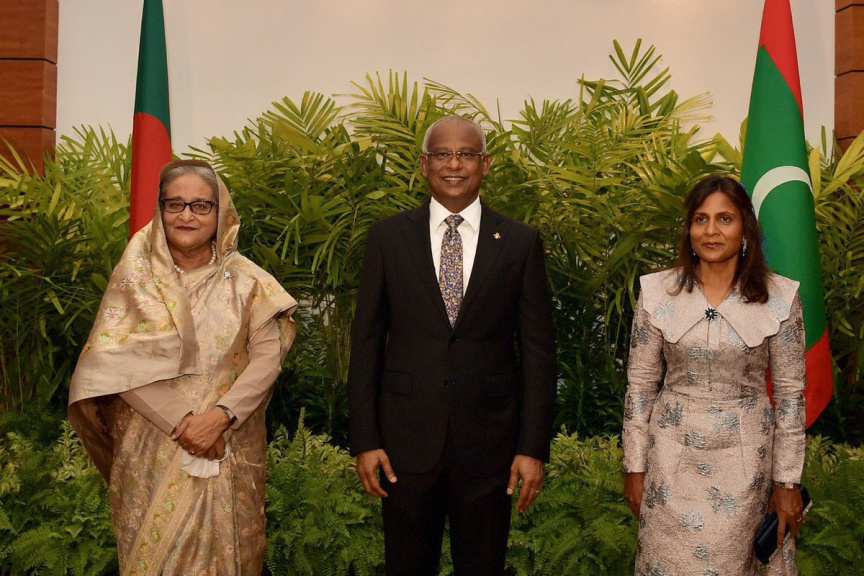 Maldivian President Ibrahim Mohamed Solih said on Thursday that the numerous high-level visits and engagements between Maldives and Bangladesh have served to strengthen previous commitments between the two countries, and find new ways to increase cooperation.

He made the remark during his speech at a special banquet he and Maldivian First Lady Fazna Ahmed hosted in honor of Bangladesh Prime Minister Sheikh Hasina at Kurumba Maldives on Thursday evening.

In his speech, President Solih emphasized the long history of cooperation, commerce, and friendship between Maldives and Bangladesh.

He said that the numerous high-level visits and engagements between Maldives and Bangladesh had serviced to reinforce previous commitments between the two countries, and find new avenues of cooperation.

During PM Hasina’s visit, Maldives and Bangladesh exchanged several memoranda of understanding in the areas of finance, health, and youth and sports cooperation.

President Solih said that the relationship between Maldives and Bangladesh went beyond interactions at the diplomatic level, and that the people-to-people connection between the countries was one of the strongest in the region.

Recalling his visit earlier this year to Bangladesh to partake in the commemoration of the birth centenary celebrations of Bangabandhu Sheikh Mujibur Rahman, President Solih said that it was an honor to celebrate the life and legacy of a man whose very name means "Friend of Bengal."

In her speech, PM Hasina noted that Maldives and Bangladesh share religious and cultural values, and are on the same developmental path.

She said that an example could be set from the bilateral relations between the two countries during the COVID-19 pandemic.

PM Hasina said that the main focus in the region should be the development of the people and that poverty was a shared enemy.

She stressed that Bangladesh's foreign policy was based on "friendship to all and malice to none”, she urged countries in the region to work together to come out of poverty.

The banquet marked the conclusion of the official program of PM Hasina’s visit to Maldives.

‘CNN Heroes’ can be viewed on MS Medianet App