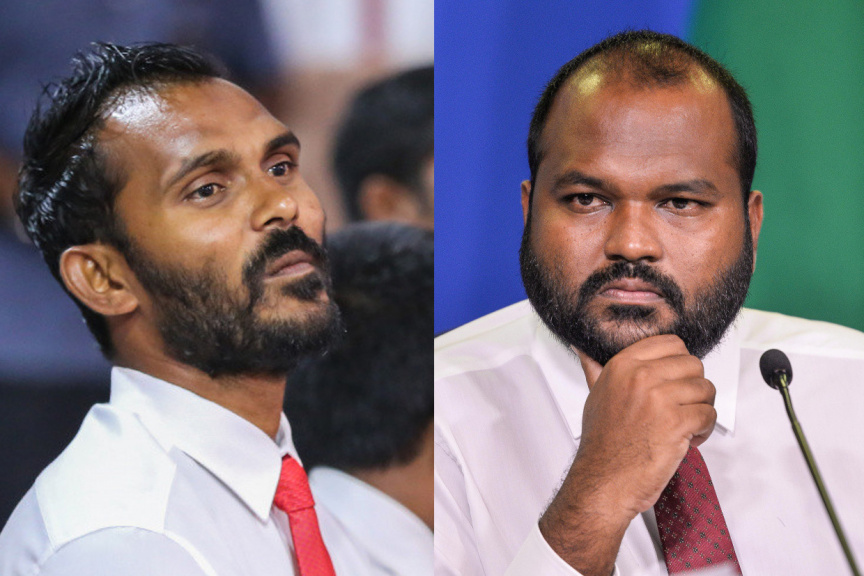 State Minister for Youth Assad Ali (Adubarey) has stated that former Tourism Minister Ali Waheed has informed that he would be unable to appear before the Criminal Court within the timeframe given by the Court.

The Court, on Sunday, announced that they will be penalizing Adubarey should Ali Waheed fail to appear before the Court in 72 hours. Adubarey signed as his guarantor for his return within the four-month period granted by the court for his travel overseas – which expired last June.

Whilst Ali Waheed has failed to return to Maldives, even five days after – a letter has been sent to the Criminal Court by Adubarey.

The letter was sent by Adubarey’s lawyer Mahfooz Saeed, on his behalf. It read that he had informed Ali Waheed to appear before the Court within the 72 hours granted by the Court – following which Ali Waheed had replied that he will not be able to return.

“I am in Immigration’s detention. That is why I cannot come. This is what Ali Waheed said,” Mahfooz had said with reference to an email communication.

As per Article 64 (f) of the Criminal Procedure Code, the judge has the discretion to impose a jail sentence that is not longer than one year on the guarantor, should the guarantor violate the guarantee provided. In addition to this, a guarantor can also be placed under house arrest, fined by an amount not larger than MVR 15,000 and be banned from becoming the guarantor for another person for a certain period.

Adubarey’s lawyer, Mahfooz said that he had given guarantee for Ali Waheed to only a four-month period – adding that as a decision has not been informed following the expiration of this period, no action can be taken against him.

“Adubarey feels that he cannot be penalized. He has requested for a hearing in the presence of the lawyer,” he had said.

Ali Waheed, had a travel ban order issued against him on July 12, 2020, by the Criminal Court. Following a review, the order was canceled on February 9, 2021, and his passport was released.

Criminal Court had canceled the order and released his passport after listening to the testimony of Ali Waheed’s doctor who was summoned to court to brief the judge regarding his condition, as well as to confirm that he needed to go abroad for medical treatment. The doctor had explained that Ali Waheed’s life may be at risk, if he undergoes surgery in the Maldives.

The Court made the decision to lift the travel ban as he had also submitted a guarantor for his return. Adubarey.

He promptly left for the UK, the same day the Criminal Court canceled a travel ban issued against him in connection to the case.