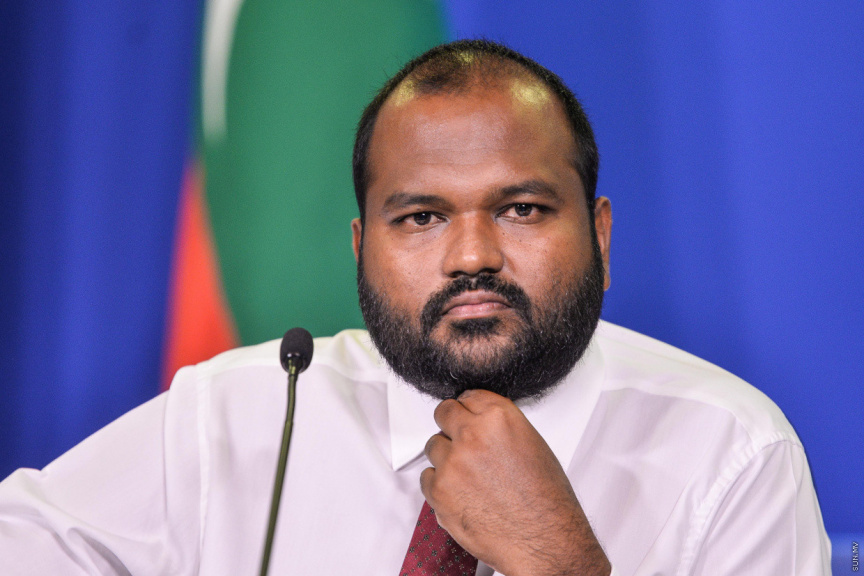 “The President ordered Minister of Tourism Mr. Ali Waheed to resign from his post in response to this tonight,” said Hood.

While the spokesperson did not specify the nature of the allegations against Ali Waheed, Sun has been informed that it involves allegations of sexual misconduct.

PRESIDENT HEARS IT FROM VICTIMS THEMSELVES, LEFT IN TEARS

Sun has been informed the President demanded Ali Waheed’s resignation after hearing of the allegations against him straight from the victims themselves.

Tourism Ministry staff attended a meeting with the President at his office earlier this Wednesday, during which they shared their experiences in detail.

Sources from within Tourism Ministry who spoke to Sun said female staff members have been subjected to sexual harassment and assault for a long time, but that it had escalated during the lockdown, until they couldn't tolerate it any longer, and decided to bring it to the attention of the President.

According to the source, Ali Waheed has repeatedly harassed staff members during official trips.

“He attempted to sexually assault a female staff member during a recent trip. She jumped off a water villa at the resort to escape,” said the source, who added that the staff member in question didn’t even know how to swim, but had been in such a state of panic that she had jumped into the water anyway.

“The President was in tears when he was told all this. He was speechless,” said the source.

Another staff member who spoke to Sun said a similar incident had taken place during a recent function at Maagiri Hotel.

According to the second source, some of the staff member who Ali Waheed targeted had been willing, while others had resisted.

“Sometimes he would grope them, or make some inappropriate comment,” said the source.

Ali Waheed has not responded to repeated calls and texts asking for a comment regarding the allegations against him.

“TIME WILL TELL THE TRUTH”

Shortly after the President’s spokesperson issued the statement, Ali Waheed tweeted that he was “proud to have served the people and the nation with honesty and energy”.

He attached a picture with the phrase “this too shall pass” in his tweet.

Alhamdhulillaahi. Proud to have served the people & the nation with honesty and energy. Time will tell the truth. InSha Allah truth will always prevail. pic.twitter.com/hZ4YOaPNFD

Maldives Police Service has issued a statement announcing they have opened a criminal investigation into “a case involving sexual abuse of female staff members at Tourism Ministry”.

A police spokesperson said the case was lodged on Wednesday night, and that additional information will be released as the investigation progresses.

The allegations of sexual misconduct against Ali Waheed come after an audio recording believed to be of a phone conversation between him and Transport Minister Aishath Nahula leaked over social media earlier this year, in which he is heard making inappropriate comments.

It had been part of a series of similar audio recordings, and had sparked demands for his resignation at the time.

However, he had dismissed the audio recordings as “fake” and “slander”.