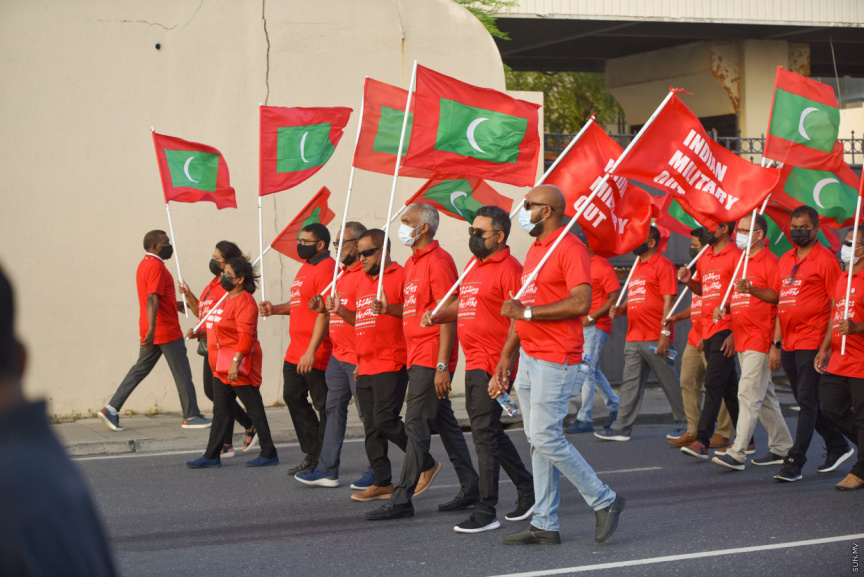 A capture from the Opposition Coalition's rally 'Maldivians in Defense of Independence' held on November 12, 2021. (Sun Photo/Mohamed Hayyan)

Opposition coalition has called on the government to cease printing money by deceiving people through suspending clauses of the Fiscal Responsibility Act.

The government has requested the Parliament for another extension to the period they are authorized to have the enforcement of Article 32 (a), (d) and (e) of the Fiscal Responsibility Act suspended up until 2023 – in order to print additional notes.

Accordingly, the government plans to print MVR 7.7 billion, if the extension of the suspension of the clauses is granted.

Opposition coalition comprising Progressive Party of Maldives (PPM) and People’s National Congress (PNC) released a statement today regarding the issue – raising their concerns. The statement read that the coalition calls on the government to stop printing such a large amount of money in a manner that is detrimental to the country’s economy in addition to not having any benefit for the people.

Noting that the Fiscal Responsibility Act only allows additional expenditure to the allocated budget that of one percent of the revenue received by the state in three years, the opposition coalition noted that MVR 4 billion has been taken after suspending the clauses of the Act.

In this regard, the coalition highlighted that this debt has not been paid off even at the end of this year.

The coalition also noted that as per the Act, the government is required to pay back the money drawn from the central bank with a period of 91 days.

They also stressed that whilst the printing of notes has been passed by a parliament with the government’s majority, it is the responsibility of a dedicated Ministry to formulate a plan on how the money would be paid back as well as to detailing how it would be spent.

Nevertheless, the opposition coalition said that that the people are unaware of how such a huge amount of money has been spent.

The opposition coalition also said that whilst state debt would climb over MVR 100 billion next year – it will be a big burden on the people to print a large amount of additional notes without the approval of the governor by influencing the central bank.

Additionally, the coalition said that the increased prices of good and service would spike even further, whereas the dollar rate would increase as well. They also said that the existing rates in the dollar black market would hike as well subsequent to which the prices of goods and services will reach levels unreachable which would adversely impact the living condition of the people.

The coalition also highlighted that businesses would go bankrupt with small businesses falling in complete ruins if such a huge amount of money is printed whilst the moratorium period granted to businesses in light of the COVID-19 pandemic has ended in addition to the cease of the issuance of income support allowance.

They also said that they are sad to say that the overdraft was passed earlier within the Parliament by silencing the opposition parties. In addition to this, they said that such was done so against the Parliament’s regulations on debates regarding such important matters.

Despite this, the coalition said that the government has requested the further suspension of the clauses of the Fiscal Responsibility Act from the Parliament – in order to print additional notes as they like.

Therefore, the opposition coalition says they are repeatedly advising the government to lower their recurrent expenses, decrease the salaries of political appointees and decrease the number of political posts as well decrease government misspends in order to manage the state budget more efficiently.

In addition to this, the coalition said that they are calling on the government to not print noted in a manner that debt is passed onto the children of children in order to given undue advantage to senior government officials and their friends.