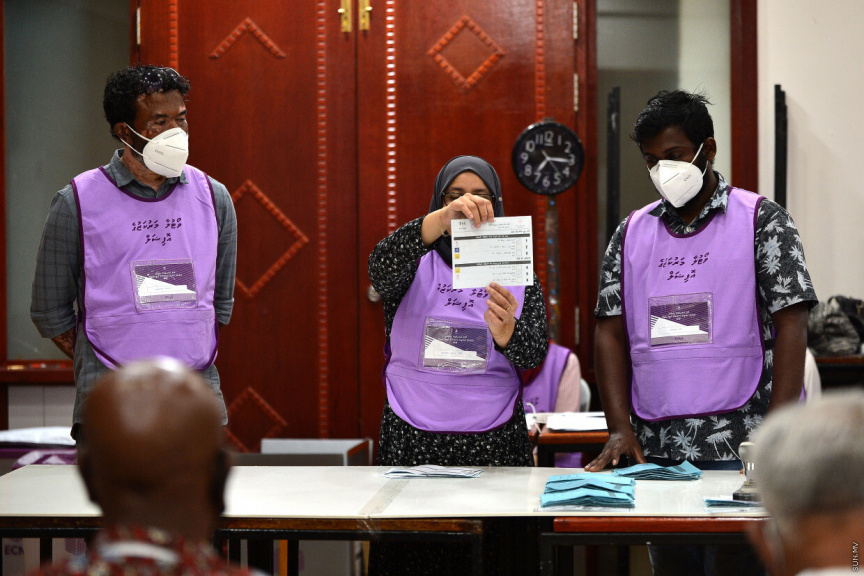 Elections Commission has made the decision to rerun council elections in Th. Gaadhiffushi and L. Maavah.

The decision was announced by Elections Commission chairman Ahmed Shareef in a press conference on Monday night.

Shareef said the decision was made as voters who weren’t registered to the two islands voted for local councils.

The election rerun in Gaadhiffushi will be between MDP candidate Mariyam Hassan and PPM candidate Hawwa Abdul Hadi.

Mariyam Hassan received 222 votes, while Hawwa Abdul Hadi received 224 votes. EC decided to rerun the election because two voters registered to other islands were found to have cast their votes for Gaadhiffushi Council.

The election rerun in Maavah will be for council president and one council member seat.

The vote for Maavah Council president will be between MDP candidate Adam Abdul Rahman and PPM candidate Ahmed Moosa.

The vote for an additional seat at the Maavah Council will be between MDP candidate Hassan Shihab and PPM candidate Ibrahim Abubakr – both of whom received equal number of votes.

EC decided to rerun the election because voters registered to other electoral districts were found to have cast their votes for Maavah Council.

Shareef said that the date for the election reruns will be announced at a later date.