Opposition warns of legal action if not permitted to campaign 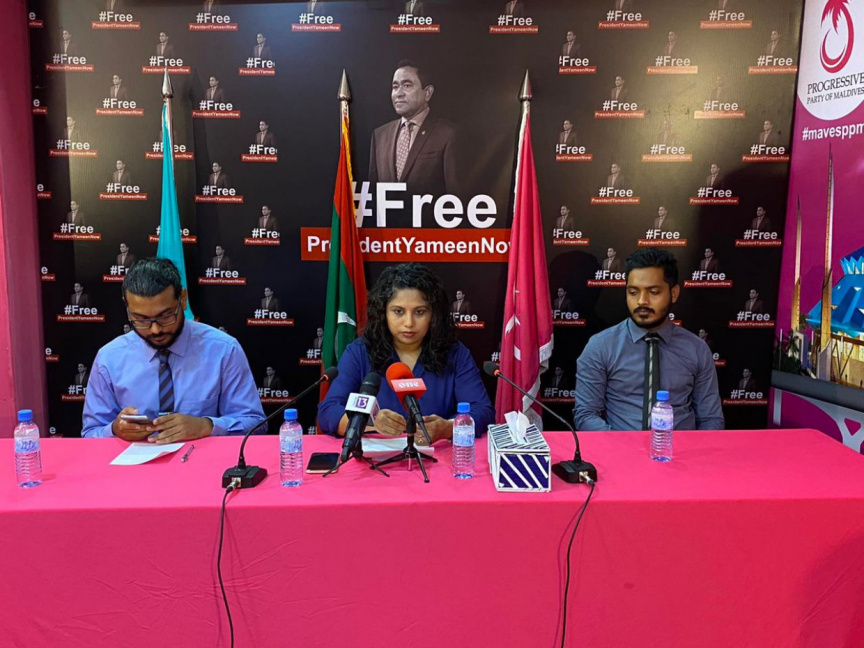 Members of the opposition progressive coalition during a press conference on December 17, 2020.

The Progressive Coalition has warned that it will take legal action if it is not permitted to campaign for the upcoming local council elections in a fair and equal manner.

PPM spokesperson Heena Waleed, in a press conference today, criticized that government officials were campaigning while traveling on official trips. She lamented the fact that the opposition were not permitted to do so.

“If things go as so, we do not believe that the upcoming election will be a fair and transparent one. And, PPM-PNC would take the matter to the courts, if we are not permitted to campaign equally.” Said Heena.

She said that opposition leaders and council members wished to travel to different islands for campaigning, but expressed concern that the Health Protection Agency (HPA) was not permitting to do so. She said that the HPA had not responded to any of the multiple letters the coalition had sent for the purpose.

“Up until today, the HPA has not responded, this is something we are very concerned about. They do not respond to our calls either,”

“Today, the HPA is seemingly the pillar that upholds the government from falling.” Said Heena.

The opposition are planning a rally in the southern city of Fuvahmulah tonight, and Heena said that opposition leaders were still not permitted to travel to the island to take part in the rally.

“Our complaint is why HPA is discriminating in this manner.” Said Heena.

She pointed out to the fact that President Solih, cabinet members, and senior officials of state companies were easily permitted to travel to events in islands such as L. Atoll and H. A. Hoarafushi.

“We wish to question whether the virus only spreads when the opposition members travel to islands. Are the President and his cabinet members as well as senior officials of companies are COVID-19 free.” Said Heena.

Elections Commission Chairperson Ahmed Shareef has previously said that the election will not be held if all political parties are not permitted to campaign equally. He has stated that discussions would be held with the HPA for the purpose but dismissed that government officials were campaigning.

Elections Commission is working to hold the elections on March 16. However, the election has not yet been confirmed.