No-confidence motion against Ameen submitted to Parliament with 24 signatures 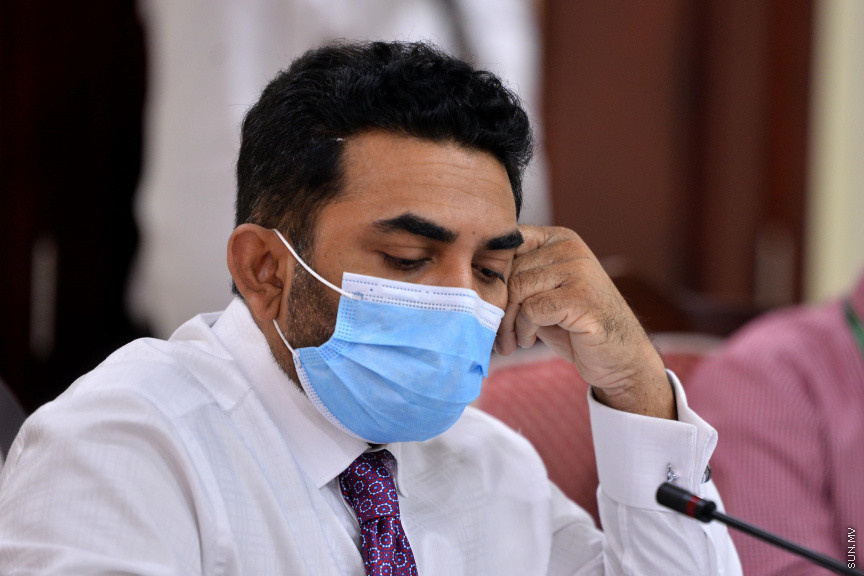 A no-confidence motion against Health Minister Abdulla Ameen has been submitted to the Parliament, signed by 24 parliamentarians from MDP.

The motion submitted against him states that investigations by both the Auditor General’s Office and the Anti-Corruption Commission (ACC) uncovered corruption from Health Ministry in the award of a contract to procure ventilators from overseas. It states that Ameen should take responsibility, and that the allegations have resulted in a loss of confidence in him.

Parliamentarians who signed the motion:

This marks the first time for a no-confidence motion to be submitted against a Cabinet minister during the current administration.

The Parliament has 87 members, and MDP enjoys a supermajority with 65 members.

The MDP parliamentary group’s emergency meeting to take the no-confidence vote against Ameen was attended by 58 parliamentarians. 27 parliamentarians voted that they lacked confidence in Ameen, which fell just three votes short of the 30 votes required to pass the motion.

MDP leader, Parliament Speaker Mohamed Nasheed has stated that he intends to push for the no-confidence motion against Ameen, even if he has to go against the party whip-line. He made the remark in a heated debate on MDP parliamentary group’s Whatsapp group shortly before the vote.

The allegations against Ameen stems from irregularities highlighted in a compliance audit on COVID-19 related spending by the Health Ministry – primarily a MVR 34.50 million contract to Dubai-based Executors General Trading to procure 75 ventilators – released by the Auditor General’s Office in August.

The company has yet to deliver the 75 ventilators.

Ameen denies both the corruption allegations, as well as the allegations that he provided false information to the Parliament.