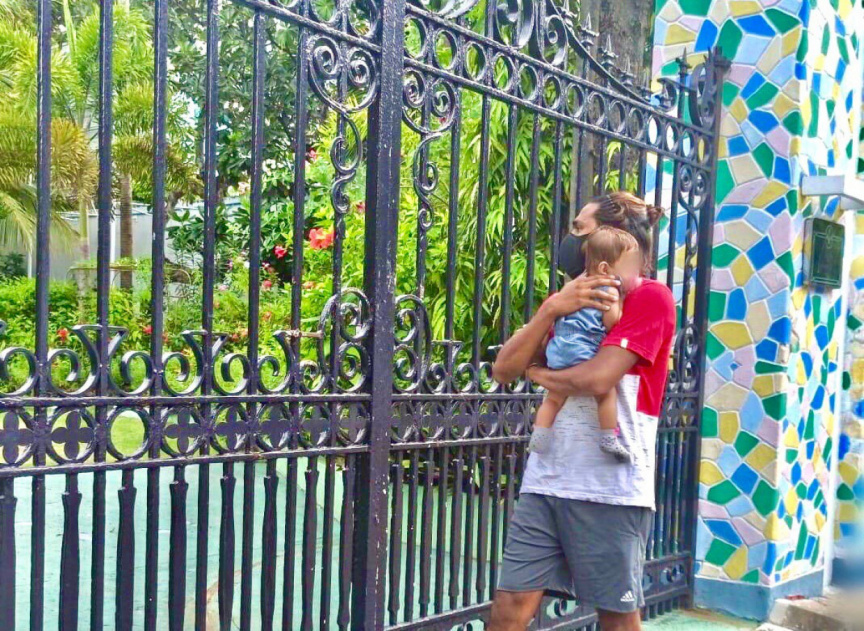 Yune Mohamed Yunan with her father in front on Muliaage on July 25, 2020.

A young couple pleaded in front of Muliaage, the presidential residence, on Saturday, asking for assistance to take their infant daughter, who suffers from heart disease, abroad for urgent medical treatment.

Hospital documents shared by the parents over Facebook show Yune Mohamed Yunan underwent open heart surgery in November 2019, and now requires an additional heart surgery to correct the narrowing of the anastomosis between pulmonary venous chamber and pulmonary veins – a condition which if left untreated can become fatal.

According to the documents, the surgery will cost approximately INR 400,000 (USD 5,400) and will require a one-month stay at the hospital.

Yune’s father wrote in a Facebook post that they went to Muliaage because they hadn’t been allocated plane seats on Aasandha’s flight to India, and were desperate.

Aasandha spokesperson told Sun that insurance has been approved for Yune’s medical and transport bills, and that the parents wish for her to be treated at Amrita Hospital.

The spokesperson said that Aasandha is unable to take any more patients to Amrita as some of the patients taken there under the sponsorship of the company have tested positive for the new coronavirus, and that the next batch of patients sponsored by the company are therefore being taken to KIMS Hospital.

“The parents of the patient want the treatment to be at Amrita Hospital. But three among patients and their caretakers sent to India’s Amrita for treatment have tested positive for COVID-19 and are being quarantined and isolated separately. Since there is no more space for patients to be quarantined for treatment in Amrita, the batch leaving on Wednesday is being sent to KIMS Hospital. Since the parents don’t want to go to KIMS, the child is scheduled to be sent with the earliest batch that will be sent to Amrita. And Aasandha is working to see if the child can be sent to Amrita separately,”  said the spokesperson.

Yune’s father went live on Facebook on Saturday evening as he waited in front of Muliaage holding his daughter.

He said that the parents went to the presidential residence after getting rejected assistance from multiple institutions, and said they weren’t receiving sufficient support from government agencies for their daughter’s treatment.

“We are trying. We are doing whatever we can for our child. But we wish to say that we haven’t received the support we should have really received from the government, or from any other source, for our daughter’s treatment,” he said.

Dr. Arif: Children are not immune to mental disorders