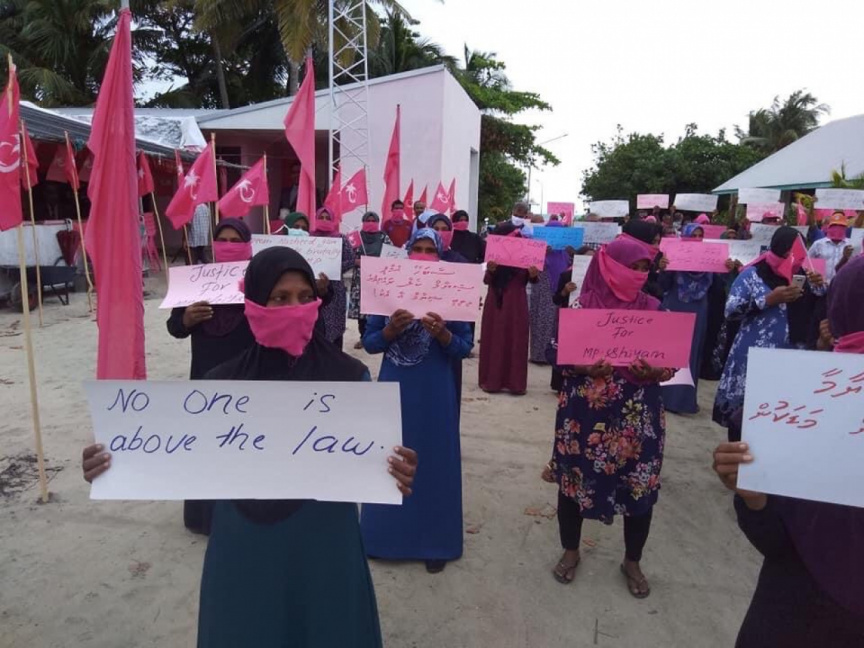 Photo shows protests in H.A. Kelaa against scuffles inside the Parliament on June 1. (Photo/PPM)

Residents of five islands in the country have held protests against the events inside the Parliament floor on June 1, which left the opposition PPM’s deputy leader and MP for Naifaru Ahmed Shiyam with injuries.

MP Shiyam was injured in the fracas that occurred after the Speaker announced the MP’s name to leave the floor. MP Shiyam refused to leave, prompting MPs from the governing MDP to forcefully remove the MP.

PPM alleges that MP Shiyam was deliberately attacked on the orders of Speaker Mohamed Nasheed who is the leader of the governing MDP. PPM later said that the MP had fractured a rib due to the scuffles and had even lodged a complaint with the Police.

The first of the protests against the Parliament fracas was seen in MP Shiyam’s constituency of Naifaru.

Opposition coalition partner, PNC leader Abdul Raheem Abdulla has even tweeted that the event had kicked off the activities of the coalition to be carried outdoors. Abdul Raheem said to Sun that protests were held in five different islands against the events.

The islands include H. A. Kelaa, H. A. Vashafaru, and G. A. Vilingili. Protestors wore masks and maintained social distancing at the protests. Participants of the protests are calling to end the imprisonment of former President Abdulla Yameen and to get justice for MP Shiyam.

“I don’t believe that MP Shiyam will receive justice during this administration.” Said Abdul Raheem who was a former MP. Despite this, he said that the activities would only increase when the lockdown order on the capital was ended. Protests would be held in Male’ City then, said Abdul Raheem who added that more islands were planning similar protests.