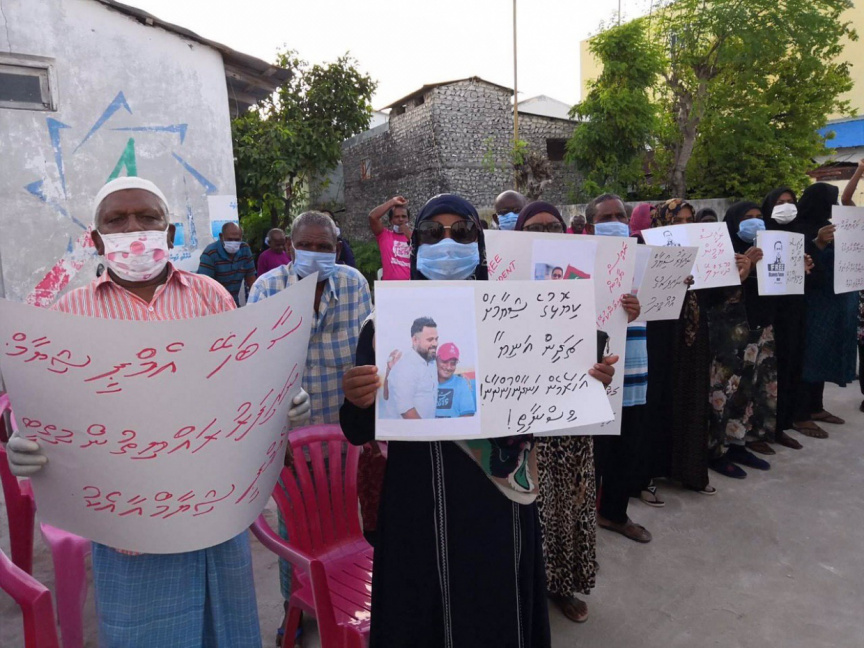 Photo shows protests that began in Lh. Naifaru on June 3, 2020. The protests were against parliamentary scuffles that left MP for Naifaru Ahmed Shiyam with injuries.

Protests are underway in the island of Lh. Naifaru for a recent altercation that occurred inside the Parliament which left MP for Naifaru Ahmed Shiyam with injuries.

MP Shiyam was forcefully removed from the Parliament session by MPs belonging to the governing MDP for causing a commotion inside the session on June 1. Photos circulated on social media show the MP on the ground and his shirt torn. MP Shiyam is the deputy leader of the opposition PPM.

PPM alleges that the MP was attacked on the orders of the Speaker Mohamed Nasheed and has lodged a request with Police to investigate the matter.

A large number of people are protesting against how MP Shiyam was forcefully removed from the Parliament. Many that took part in the protest were wearing masks and adhered to social distancing rules.

Those protesting say that the events inside the parliament “would not be forgotten” and that they were proud of the actions of their MP.

Protesters have even gone as far as to call for the resignation and arrest of the Speaker for the events inside the Parliament. Photos on social media show people of all ages taking part in the protest.

PPM has said that MP Shiyam suffered a fractured rib due to the altercation and was discharged from the hospital to week-long bed rest at home.