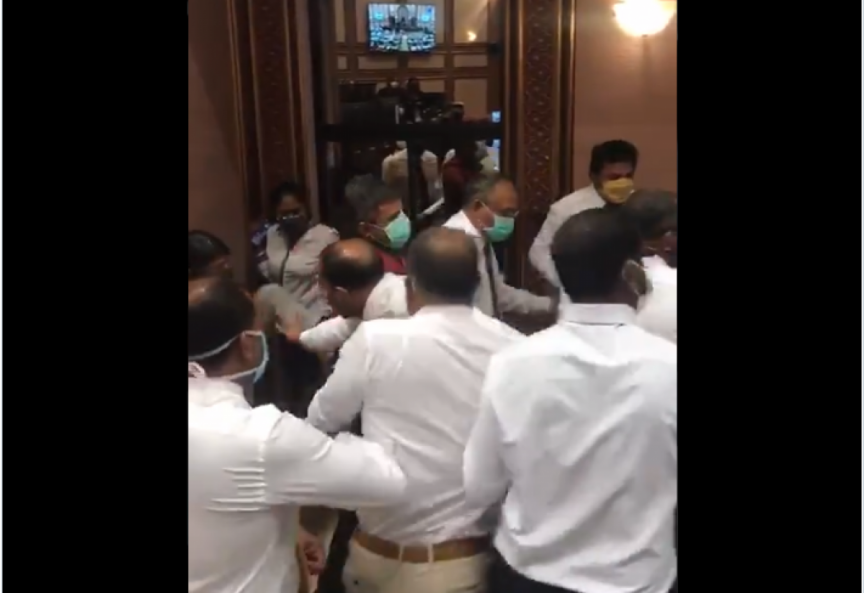 Screen grab from a video of the scuffle inside the Parliament's chambers on June 2, 2020.

The opposition coalition has called for the police to open a criminal investigation into Deputy Speaker Eva Abdulla, accusing her of kicking opposition parliamentarian Hussain Mohamed Latheef amid the scuffle inside the Parliament’s chambers early Tuesday.

The scuffle had taken place during the parliamentary sitting held at 01:30 am on Tuesday to pass a key constitutional amendment to extend the term of incumbent councilors, an amendment opposed by the Progressive Party of Maldives (PPM) and People’s National Congress (PNC), which form the opposition coalition.

At the sitting, PPM deputy leader Ahmed Shiyam voiced his opposition to the amendment and attempted to disrupt parliamentary proceedings. Following this, the Speaker, former Maldivian President Mohamed Nasheed named Shiyam, who serves as the parliamentary representative for Naifaru constituency, for breaking the rules of conduct within the Parliament. And when Shiyam refused to leave the chambers and continued to protest his objection to the amendment, ruling Maldivian Democratic Party (MDP) parliamentarians attempted to forcibly remove him from the chambers.

Shiyam was forced out of the chambers by MDP parliamentarians instead of the Sergeant-at-Arms – a violation of the Parliament’s Standing Orders.

The opposition coalition, in a press statement it released following the incident, accused Speaker Nasheed , the leader of MDP, of ordering  his party’s parliamentarians to attack Shiyam.

“We condemn the act by the Parliament’s Deputy Speaker, North Galolhu MP Eva Abdulla, of kicking Faresmaathoda MP Hussain Mohamed Latheef, a member of this coalition, in the harshest terms,” said the coalition in its press statement.

Eva was not immediately available for comment regarding the allegation.

The opposition said that the position of Deputy Speaker was a highly responsible senior position within the State. And that such a ‘dangerous and dirty’ act by an official serving in the position cannot be tolerated.

“And we call on Maldives Police Service to investigate this dangerous, dirty and uncivilized act and take action,” said the opposition in its statement.

The opposition has also called on the police to investigate the allegation Speaker Nasheed ordered an attack on Shiyam.