PPM deputy leader fractures his ribs in scuffle within Parliament 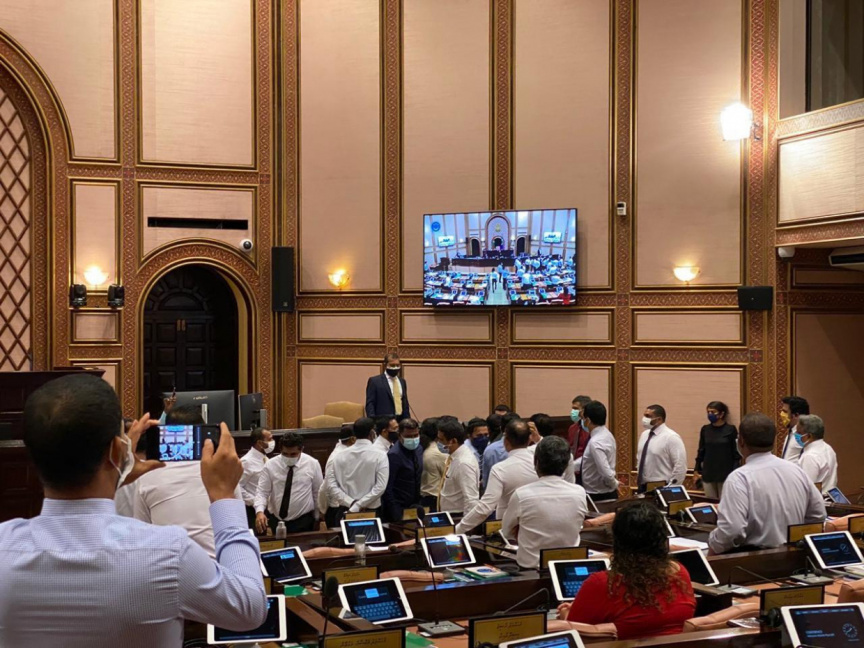 Parliamentarians attempt to force PPM deputy leader Ahmed Shiyam from the Parliament's chambers on May 2, 2020.

Progressive Party of Maldives (PPM) has announced the party’s deputy leader Ahmed Shiyam sustained a fractured rib along with other injuries during the scuffle which took place between him and other parliamentarians inside the Parliament early Tuesday.

PPM’s spokesperson Heena Waleed said on Tuesday morning that doctors confirmed Shiyam, who serves as the parliamentary representative for Naifaru constituency, sustained fractures to his ribs and lower back.

She said that Shiyam sought consultations from doctors twice, and has been ordered to four weeks of bed rest.

He has been discharged from the hospital following medical care.

The violence had taken place during the parliamentary sitting held at 01:30 am on Tuesday to pass a key constitutional amendment to extend the term of incumbent councilors, an amendment opposed by both PPM and People’s National Congress (PNC), which form the opposition coalition.

At the sitting, Shiyam voiced his opposition to the amendment and attempted to disrupt parliamentary proceedings. Following this, the Speaker, former Maldivian President Mohamed Nasheed named Shiyam for breaking the rules of conduct within the Parliament. And when Shiyam refused to leave the chambers and continued to protest his objection to the amendment, the Sergeant of Arms was dispatched to escort him out of the chambers.

Videos and photos of incident show Shiyam lying on the group with his shirt torn open.

PPM has accused the Speaker of ordering parliamentarians to attack Shiyam, and have lodged a complaint with the police over the incident.

The constitutional amendment, along with a sunset law to keep the powers of interim councilors in check during the interim period was passed with the unanimous consensus of 74 parliamentarians who attended the sitting. The legislatures were passed just one day before the term of incumbent councilors will expire, plunging the country into a legal vacuum.