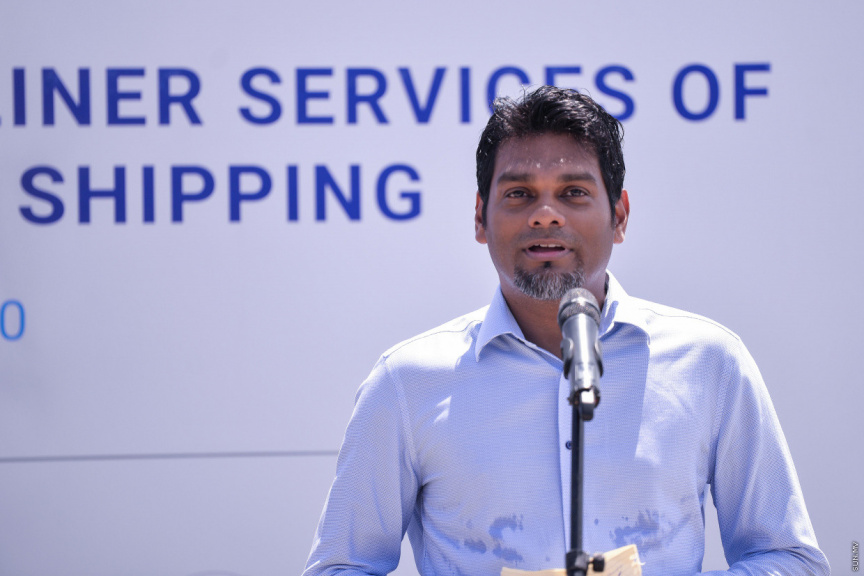 The Managing Director and CEO of State Trading Organization (STO) Hussain Amru Mohamed Rashaad speaking at a ceremony on April 5, 2020.

The Managing Director and CEO of State Trading Organization (STO) Hussain Amru Mohamed Rashaad has said that the establishment of a state-owned shipping line was an important step in the economic sovereignty of the Maldives.

Amru was speaking at the ceremony held today to commemorate the arrival of the boat named as MV Iberian Express, the first boat of the Maldives State Shipping, which is a subsidiary of STO.

He recollected that Maldives had its own shipping line previously, which was dissolved due to the inability to keep up with the changes coming to the world. He noted that the shipping line gave opportunities for Maldivians in employment and to travel to many different places back then.

He stated that adapting and familiarizing with new innovations in order to have a strategic line of thought was important with the introduction of the new shipping line.

“This is an important step in the development of the country, for the economic sovereignty, to fulfil the needs of the public and the country.” said Amru speaking about the establishment of the MSS.

Maldives Ports Limited (MPL) CEO Shahid Ali, also speaking at the ceremony said that the shipping line gave hope for businesses to import goods more conveniently and for individual members of the public to gain access to these goods.

“The benefits of the shipping line will be experienced by businesses, businessmen and public individuals as well/ We do not have doubts that there will be changes in the price of goods.” said Shahid who added that MPL employees were constantly working to off load goods so that no difficulties are faced in sourcing the basic necessities for the country at a time when  the country was battling to prevent the Covid-19 virus.

He highlighted the work by MPL employees who work with foreign boats during this time after noting the advantages that the MSS will bring to the economy.

The MV Iberian Express has the capacity to transport 700 containers of 20 feet.  The boat arrived in the country today carrying medical supplies and staple food items. The company MSS will be run as a subsidiary of the State Trading Organization (STO) which will own 99.99 percent of the company. Maldives Fuel Services will own 0.01 percent.