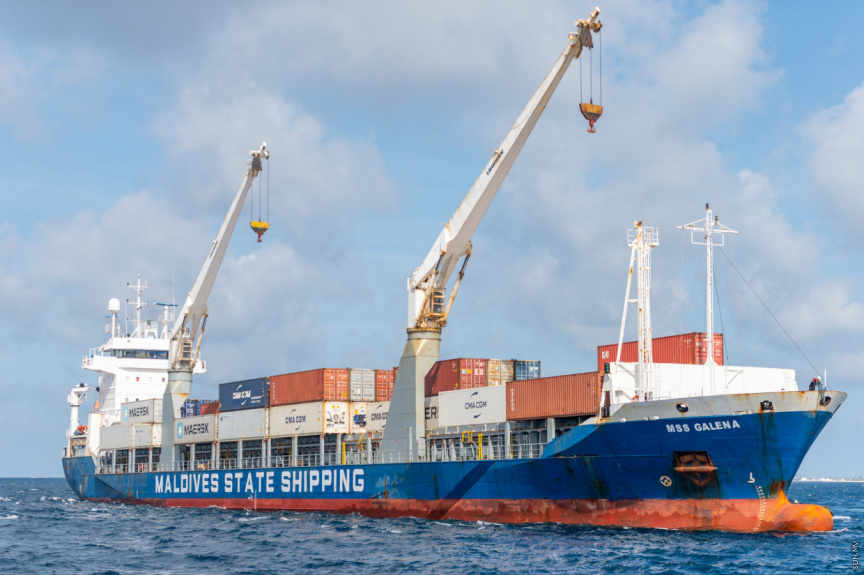 MSS Galena – the first ship purchased by Maldives State Shipping (MSS) - has made her maiden call at Male’ Commercial Harbor.

The landmark occasion was celebrated at the Male’ Commercial Harbor on Tuesday morning.

Speaking at the ceremony, MSS’ General Manager Captain Mohamed Nazim described it as the day MSS’ name was written in Maldivian history in gold letters.

“This is a happy and historic day for the journey MSS began in early 2020, using limited staff and limited resources, at a time when the entire world was closed due to the unprecedented COVID-19 pandemic, forcing a halt to domestic and international travel,” he said.

Nazim said that one of MSS’ key goals is to provide Maldivian people and traders with access to food and other commodities at an affordable rate.

“Bringing in our own ship to provide a quick solution to the difficulties facing the people, at a time when foreign influence over the Maldivian shipping sector has increased, raising prices of goods significantly, was a historic decision,” he said.

Nazim said that MSS Gelena has the capacity to carry 680 containers and a 60-ton crane. He said that the ship will be fully utilized in the shipping sector.

“We plan on trips between Male’ and Colombo every eight days. We will try to maintain this schedule without interruption,” he said.

Nazim also noted that the ship will sail under the Maldivian flag and with Maldivian crew.

The crew of the ship, except for two, are Maldivian.

MSS was presented with a plaque of recognition from Maldives Ports Limited (MPL) at the ceremony.

Speaking at the ceremony, MPL’s CEO Shahid Ali said that the ship would be beneficial to the entire Maldivian people, and provided assurance MPL would provide its full cooperation to MSS.

MSS’ Managing Director Captain Abdulla Saeed noted that MSS was created after 10 years without a state shipping line in Maldives.

“If this goes ahead as the Maldivian government has planned, the maritime sector will be full of employment opportunities for Maldivian youth. We are extremely proud today, to have a Maldivian captain on our own ship,” he said.

Saeed said that MSS plans on training Maldivian youth to work on the ships that will be added to the company’s fleet in the future. He said that MSS expects to offer scholarships for engine and deck cadets in the coming year.