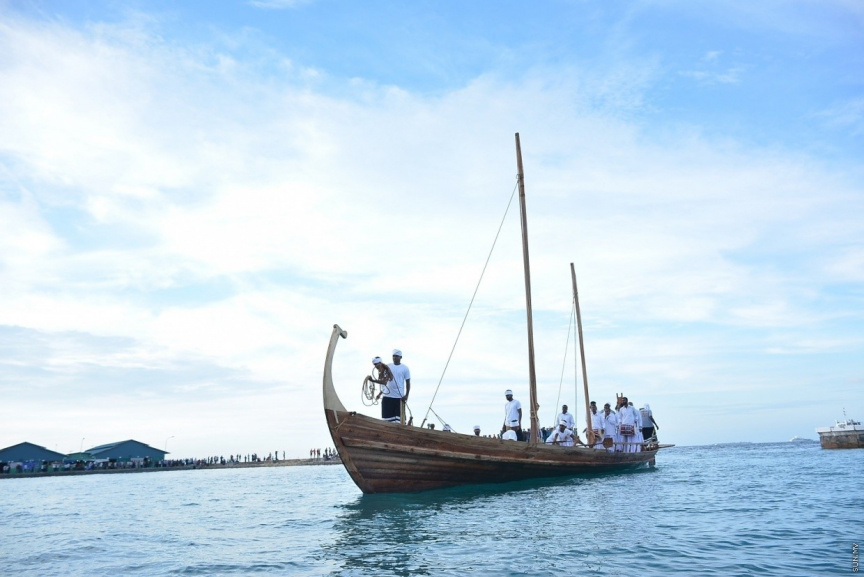 The Kalhuohfummi boat is pictured nearing the Izzuddine harbor of the capital Male' city. A report by the Auditor General's office into the Home Ministry in 2016 revealed a waste of more than MVR 800,000 by the government to showcase the boat in city park for the "Minivan 50" celebrations.

A 2016 report by the Auditor General’s Office into the Home Ministry has revealed that the ministry wasted MVR 800,000 to build a boatshed to showcase the Kalhuohfummi in Male’ city park for the “Minivan 50” independence day celebrations.

The report revealed that the project was awarded without a public announcement and MVR 840,257 was spent for the project. It was also highlighted that this whole procedure was carried out against the public finance laws of the Maldives.

The massive amounts of cash spent on the park can only be viewed as a waste to anyone who sees the park today as it lies in ruins. All the work to try and showcase the Kalhuohfummi in the park is also not. The location of the boat, that took MVR 1 million to build is also unknown.

The audit report also noted another issue. The purchase of LED trees for MVR 486,863 to decorate the city park after the trees and transformers were damaged in an attempt to move the decorations from the Sultan Park to the city park.

The law states that such purchases rising above MVR 25,000 must be carried out after assessing the applications received from a public announcement. This was not followed by the Home Ministry, according to the report. The report advised to adhere to the public finance regulations and laws of the country and carry out other expenses in a transparent manner that is beneficial to the state.

The audit report also noted purchases of goods and services without an announcement that amounted up to MVR 6.8 million by the Maldives Police Service and Maldives Correctional Services, which are run under the Home Ministry.