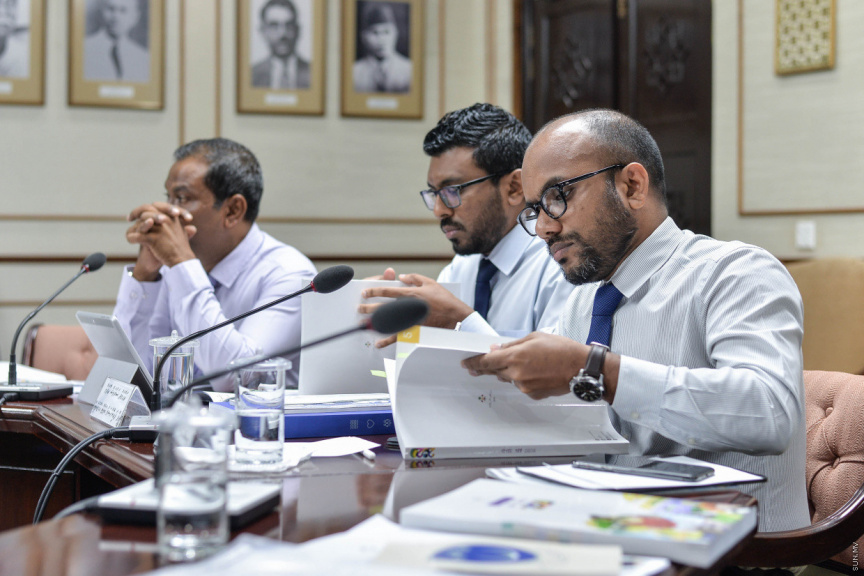 Finance Minister Ibrahim Ameer is pictured at a meeting of the Budget Committee of the Parliament to discuss the Income Tax bill. Lawmakers have amended the bill so that the threshold for collecting taxes under the bill is raised to MVR 60,000. (Sun Photo/Fayaz Moosa)

Amendments brought to the Income Tax bill in the parliament are estimated to reduce the revenues obtained from the bill by MVR 150 million.

The biggest takeaway was the change of the threshold from people earning MVR 40,000 to MVR 60,000 in the meeting of the Committee of the Whole House Sub Committee in the Parliament. The government presented to collect taxes from those earning above MVR 40,000 which would yield about MVR 600 million from 6000 people. However, this was objected to by several MPs who stated that this went against the promises made in the Agenda 19 manifesto of MDP.

The promised threshold in Agenda 19 was MVR 60,000 and this change would see a dropping of the revenue to MVR 450 million. moreover, Finance Ministry also expects the income to be reduced even further since the date of collection is being postponed by three months. The government proposed collecting taxes starting from next year.

Amendments brought to the bill

The threshold for collecting taxes increased to MVR 60,000.

Income tax to be collected within three months of Presidential assent. An income tax of 5.5 percent will also be levied on companies run in the country that earns more than MVR 1 million from dividends.

Even though the income for next year is expected to drop, the state budget passed by the Committee has injected a further MVR 366 million into the initial MVR 37.50 billion budget. However, this move is expected to increase the budget deficit as well.