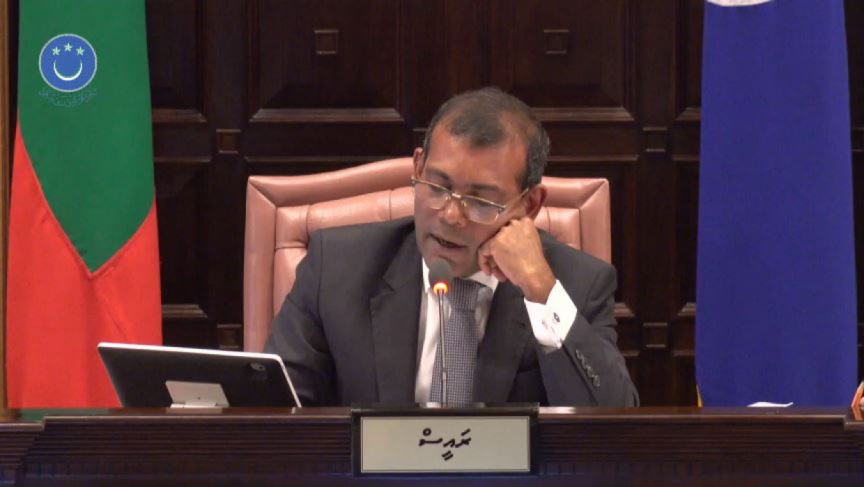 The Speaker of the Parliament has dismissed the opposition MPs' efforts to disrupt Parliamentary proceedings as useless and pointless. Nasheed’s comments were directed at the opposition PPM-PNC MPs who raised their voices and interrupted other MPs from speaking today.

The opposition MPs had been voicing their discontent at the disciplinary proceedings commenced by the Judicial Service Commission against Criminal Court senior judge Ahmed Hailam. Judge Hailam was suspended later today regarding a cartoon he posted in a recreational Viber group of the Criminal Court that depicted President Ibrahim Mohamed Solih and Speaker Nasheed chained along with the main instigators of November 3, 1988.

Speaker Nasheed who is also a former President advised the opposition MPs against misbehaving and disrupting the work of the Parliament before announcing the names of four MPs to expel them from the session.

“You should know that the 6-7 of you cannot disrupt the Parliamentary proceedings. We have 60…many other MPs here,”

“You can’t disrupt the order here. You can’t conduct that work here anymore. I am stating this earnestly.” said Nasheed.

Parliament session today had heated up as soon as it began with Nolhivaram MP Mohamed Nasheed who most notably blew a whistle in the parliament several times. The Speaker also took additional disciplinary action against Mahibadhoo MP Ahmed Thoriq (Tom) for refusing to exit the parliamentary chambers after his name was called for disruptive behavior.

Nasheed had instructed Tom to demonstrate his remorse for his disruptive behavior during the parliamentary sitting last Monday by committing it to paper 100 times.

“There is a lot of work here (Parliament). Please do not do this.” urged Nasheed.