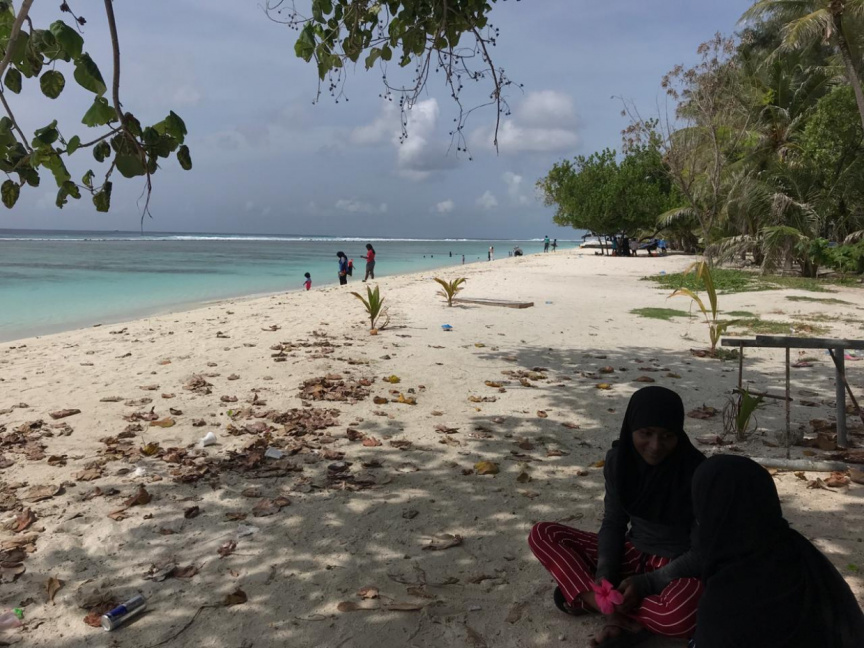 A family spending time on the beach in Hulhumale'. (Sun Photo/Shafna Hussain)

A heartwarming image formed as children ran around playing and enjoying in the white sand while their parents rested nearby, watching over them. A few kids were also darting around near the waterline on th eastern beachfront of Hulhumale'.

You could be forgiven for finding it hard to believe that this used to be a bustling location full of tables and chairs owned by cafes and restaurants just a few weeks ago. That has now been transformed into a tranquil location for families to spend time and relax near the beach.

It has been ages since the cafes and restaurants that operated on the location moved in. It is easier to appreciate the beach and its beauty now since the businesses have moved out and the beach is finally available to the public again.

The big businesses operating on the beaches of Hulhumale' had made it impossible for the ordinary person to indulge in the true beauty and peacefulness of Hulhumale'. People could still enjoy the water, but for the restaurant and cafe businesses, the beach was their playground to provide services that they can charge and gain profits from.

Tables and chairs crowded the beach up until the waterline for years with waiters carrying dishes rushing around the place an everyday scene. Some businesses had even constructed outer walls around their preferred area, effectively cutting off public access to the area and making it their own.

In a country where land resources are scarce, this can be somewhat an irritating prospect for many. The actions of these businesses led to a lot of public complaints as the beach was not only used by people living in Hulhumale', the beach is visited and used by almost everyone living in the Greater Male' Area and those visiting from other parts of the country.

"We faced a lot of difficulties then, there was no space for our kids to play and run or enjoy themselves. I don't come here to get into the water, I prefer to wait on the beach and let my kids enjoy the water while I watch over them and wait with the water bottles and bags. Back then my kids always had to go home straight from the sea, all wet," said a middle-aged woman standing underneath an umbrella.

She is not alone in this notion. Most people stated that they prefer if the beach remained free from the businesses who would once again hold it hostage. They want it free and open for the public in all its beauty and do not believe that it is a place that should be full of tables and chairs.

HDC first cleared the beach in January, however, that barely lasted two months and saw the return of the tables and chairs hogging the beach once again. HDC stated that it had given permission temporarily for the businesses to operate in the area without any structures until the sewerage system works that are to be carried out in the area began.

The corporation finally cleared up the beach at the start of August and stated that it does not plan on permitting businesses to operate on the location even after the sewerage projects were completed.

"The beach will be a public area. We have decided that even if we allow chairs and tables to be set up in the location, the public would still be able to use the beach," Managing Director of HDC Suhail Ahmed said to "Sun". He also stated that HDC had a plan to develop the area for the public to enjoy.

The current plan is to establish facilities for the public who visit the beach. The Planning Ministry has decided to install showers and toilets in the area for public use.

The surprising fact is that the beach area on the east of Hulhumale' has always been a public space. No permits were given to any businesses to operate in the location. The businesses that were doing so, were operating without any official authorization, which would have infuriated the public even further. HDC is now working on forming a policy on how the public areas in Hulhumale' can be utilized, and Suhail stated that the work was almost finished and would be publicized very soon.

A place that is connected to the happiness of a lot of people, the scenes that are now on display at the beach will bring a smile to the heart of anyone who visits it. Kids running around, families enjoying the sun, sand, and sea. The nearly 100,000 residents of Greater Male' area can finally enjoy the Hulhumale' beach after ages and they prefer to keep it that way.