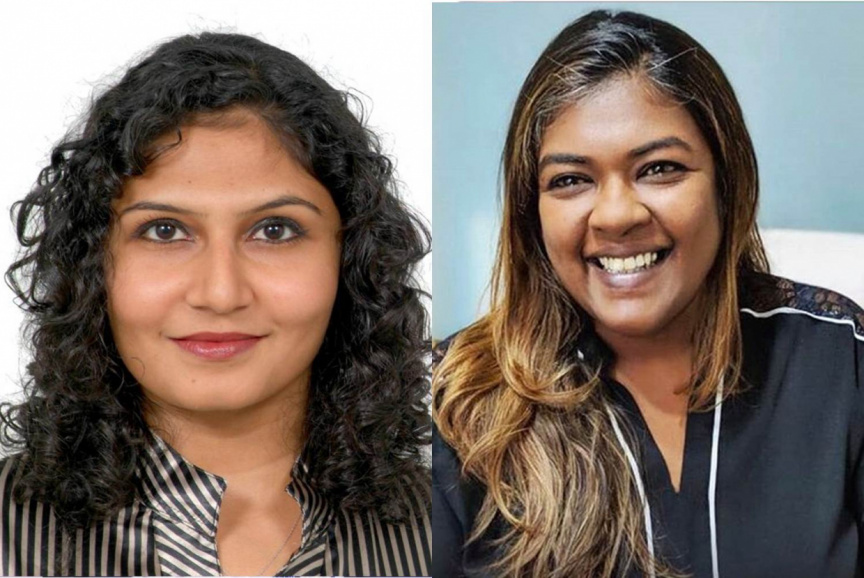 Shujoon (R) and Esmeralda (L) have been nominated as justices for the Supreme Court of Maldives by President Ibrahim Mohamed Solih, however, this move was condemned by the Fatwa council who stated that this was not allowed in the religion.

President Ibrahim Mohamed Solih's historic decision to nominate two female judges to the Supreme Court of the Maldives has been subjected to mixed reactions on social media.

Due to religious views on the matter, this topic remains sensitive in the Maldives. This is the first time a woman is nominated to the Supreme Court. The sensitivity of the topic is already evident from the praise and sharp arrows of criticism already raining on the matter from members of the public on social media.

Many rushed to congratulate the two nominees, former High Court Justice Dr. Azmiralda Zahir and former Civil Court Justice Uza. Aisha Shujune Muhammad from M. Kokaahandhuvaru after it was announced that the President Ibrahim Mohamed Solih had asked the Judicial Service Commission on advice regarding their appointment to the Supreme Court.

This was viewed as a great step forward for women in the Maldives and was welcomed by top-level members of the legal profession and the government and members of the public. Minister of Gender, Family and Social Services Shidhatha Shareef described the day as a historic day.

"Today is a historic day. It is a great opportunity. Maldivian women should start rising and facing positions of power and decision making with courage. We are right there behind you," said Minister Shidhatha.

Thank you Mr. President. It’s time we had women on the Supreme Court bench.

Former Minister of Gender and Founder of women's rights organization "Hope For Women" Aneesa Ahmed, a receipient of the prestigious International Women of Courage Award, also thanked and welcomed the president's decision.

The decision was also praised by the first female Attorney General of the country Uza. Aishath Azima Shakoor stated on facebook that this was a step forward and that the two nominees Dr. Azmiralda and Ms. Shujune were very capable and qualified judges.

A facebook status by opposition People's National Congress (PNC) lawmaker and Parliamentary Group Leader Adam Shareef Umar that asked for the opinion regarding the matter of the female judges was replied to by party ally Azima, who stated that this was a step in the right direction and urged not to oppose this move even it "we are the opposition".

Former Attorney General Uza. Fathimath Dhiyana Saeed also tweeted that it was a wonderful day for the legal fraternity and a huge win for women.

A wonderful day for the legal fraternity and a huge win for women.

Another former Attorney General and esteemed lawyer Husnu Al Suood congratulated the two nominees and stated that this was a step towards reforming the judiciary.

Congratulations to @ShujuneM and Azmiralda Zahir, on their nominations as the first female judges of the Maldives Supreme Court. This is a step in the right direction for @judiciarymv reform. Our legal community is proud of you. https://t.co/TownQLSiyS

Some religious scholars were not chipper about the two female nominations and criticized the decision and shared their opinion on social media as well.

Religious scholar Ali Zaid stated that this goes against the Quran and Sunnah and was a grave sin. He also stated that the recently deceased former Islamic Minister Dr. Abdul Majeed Abdul Bari had said women cannot be judges, to give more power to his statement.

Sheikh Hassan Moosa Fikury also stated that appointing females as judges were not allowed in the religion and advised the president not to do so.

On July 9, the Supreme Council on Islamic Fatwa in the Maldives had also decided that it was prohibited to appoint females as judges in Islam.

If Azmiralda and Shujune are appointed to the Supreme Court, it will indeed be a historic day for the country, women and the legal profession as well. It should also be noted that women have been appointed as judges in other developed Islamic nations. The easiest example is the current Chief Justice of Malaysia who is a woman.