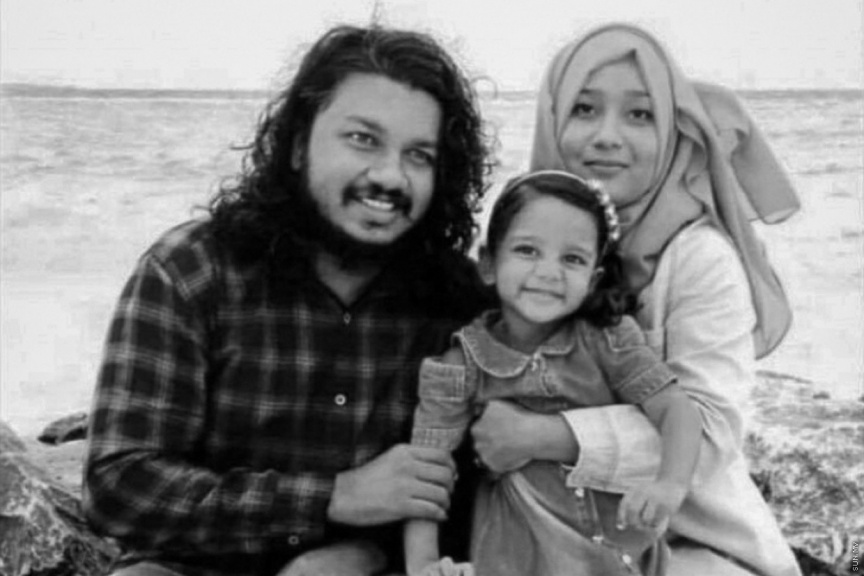 The news of a speedboat capsizing in bad weather near H.Dh. Hanimaadhoo, killing five onboard including a child was heard by a grief-stricken heart by all Maldivians. The tears streaming down the face of the country has no end.

Five others on the speedboat were also treated at the Hanimaadhoo Health Center, with two of them later being discharged.

This is not something that happens often in the Maldives. The speedboat was on a short ten-minute trip between neighboring islands with ten passengers when it capsized. Five were rescued from the sea by MNDF, who also faced difficulties in reaching the scene due to the bad weather. It should be noted that the yellow alert weather caution was issued for the area at the time when the speedboat set out for its short ill fated journey.

The tragic incident also raised questions regarding safety at sea in the hearts of the tearful Maldivians.

The 23-feet speedboat named "I Speed" had fended off the first wave before succumbing to a sudden second wave and overturning. There were no safety measures such as wearing lifejackets undertaken on the speedboat when it set out to H.Dh Hanimaadhoo from the neighboring island of H.Dh Nolhivaranfaru.

Authorities were made aware of the incident after the captain of the boat had swum to shore for help. MNDF coastguard principle director Colonel Mohamed Saleem outlined the importance of taking safety measures on a personal and individual level to prevent such incidents when he spoke about the incident yesterday.

Weather alerts and safety measures are not taken seriously enough by Maldivians. It should be noted that no one saved from the incident of yesterday was wearing a life jacket. This was a sticking point by some members of the public on social media who pointed out that more lives could have been saved if such measures had been taken.

The Transport Authority had yesterday stated that it was the responsibility of the captain on a vessel to make sure that all passengers were wearing life jackets, however, no law explicitly states this. This prompts the discussion of including such a measure as a mandatory one in the law as weather phenomenons and dangers at sea can never be predicted.

At the helm of the speedboat was a captain with experience of traveling in the area. The trip was a short one between two neighboring islands. Maldivians maybe proudly known as children of the sea but the sea is an unpredictable element of nature. No matter how strong a swimmer you are, no matter how good the captain of a vessel might be, no matter how short a trip may be, there is little that can be done to prevent the loss of lives in such a situation if safety measures are not taken.

The funeral of those who lost their lives in yesterday's incident was held at Masjid al Moosa around 1:30 in Hanimaadhoo and was attended by people from Nolhivaranfaru, Hanimaadhoo, and even Male' City.

The reason for the lax in safety by Maldivians maybe because we are used to traveling in rough weather. However, this is not the first such incident in the Maldives. This tragedy would take all Maldivians back to the "Enama" Boat incident which saw the loss of 24 lives in 2004 and the 1991 capsize of a safari near Gulhifaru that saw the loss of six lives.

The heart-rending incident of yesterday has once again left the whole country mourning.