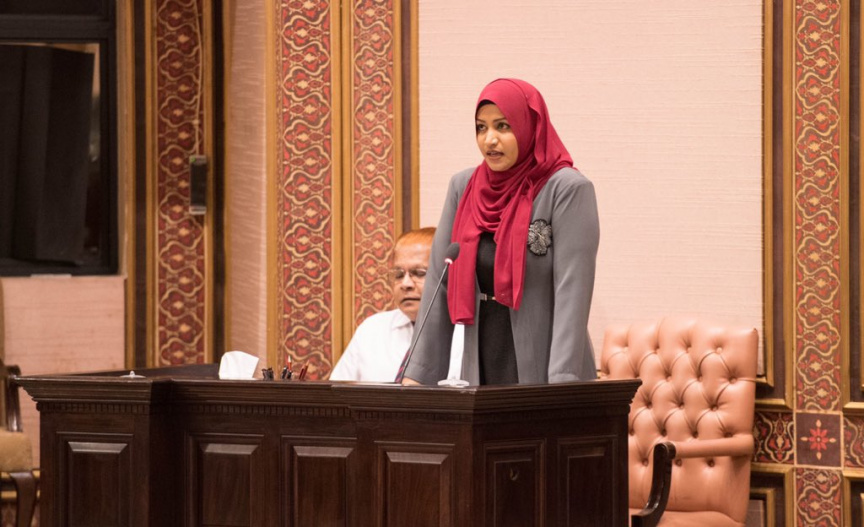 Minister of Transport and Civil Aviation, Aishath Nahula responds to questions at the Parliament on August 7, 2019. (Photo/People's Majlis)

Transport Minister Aishath Nahula says the solution to the issue of congestion and lack of parking space in the capital Male’ City is to impose a limit on registration of vehicles.

Nahula was summoned to the Parliament by Kaashidhoo MP Abdulla Jabir for questioning over issuance of parking violation stickers despite the lack of parking space in the capital this Wednesday.

“Though we may create parking spaces within Male’, the permanent solution to the Male’ parking issue is to control the vehicles registered in Male’,” said Nahula, adding that she has presented a paper to the Cabinet regarding recommendations to remedy the congestion in the streets of Male’.

“The paper describes the traffic issue and the remedies in detail,” she said.

Nahula said the creation of a parking area at the Velana International Airport for airport employees had resulted in a considerable reduction in number of vehicles parked at the Boduthakurufaanu Magu.

She also noted the creation of a parking area for the use of visitors to the airport in exchange for a fee.

“It remains the reality that people continue to park wherever with no consideration of designated parking zones if there is no way to park directly in front of the place they drive to, as is the habit,” said Nahula, noting that such actions created a public nuisance.

Nahula stressed that the Land Transport Act must be enforced, and that that transport regulations dictate action which must be taken for traffic violations.

“Therefore, because we find we cannot choose inaction over actions necessary for the welfare of the general public, the police continue to issue stickers but only on vehicles which are parked illegally and cause a public nuisance,” said Nahula.

She said the Transport Ministry was currently engaged in research to identify a permanent solution to the issue.

Nahula also noted that allocation of sufficient parking space was not given enough thought when the streets of Male’ were designed. She said that the government wanted to take measures which were as undisruptive to the public as possible, and provided assurance of establishment of as many parking spaces as possible.

Minister: I just don't post my work on social media

Jabir asks Nahula be brought in front of committee

Maafaru airport to be operational in September