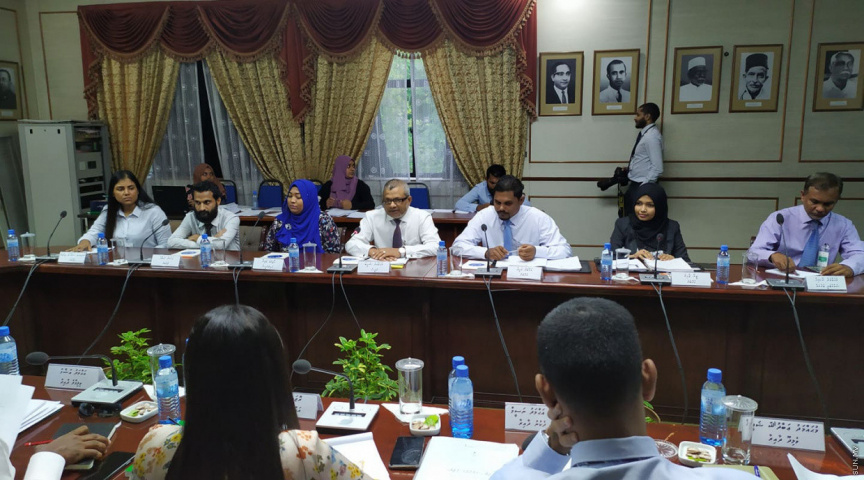 Members of Maldives Broadcasting Commission are questioned by the Independent Institutions Committee of the Parliament on June 19, 2019. (Photo/Sun/Fayaz Moosa)

Independent Institutions Committee has launched separate probes into each and every member of Maldives Broadcasting Commission.

The committee, at its last meeting, established a four-member subcommittee to carry out and complete its probe by Saturday, July 6.

The subcommittee will question each BroadCom member individually.

The meeting to question the first member, President of BroadCom, Mohamed Shaheeb, was held behind closed doors by the subcommittee at 10 am this Thursday.

The Independent Institutions Committee, last week, made the decision to hold a no-confidence vote to impeach Ismail Sofwan – the former Vice President of BroadCom.

He voluntarily resigned before a no-confidence vote took place, and another member, Hassan Nabah rendered his resignation on June 30.

In a subsequent meeting, the committee agreed to decide on measures against the other BroadCom members after questioning each of them separately.

All six members of the BroadCom was questioned by the committee on June 19, during which members accused each other of wrongdoing. They also admitted to singling out specific media stations for penalties.

The BroadCom members also admitted to attempting to shut down private television channel, RaajjeTV, at orders from then-President Abdulla Yameen Abdul Gayoom in 2018.