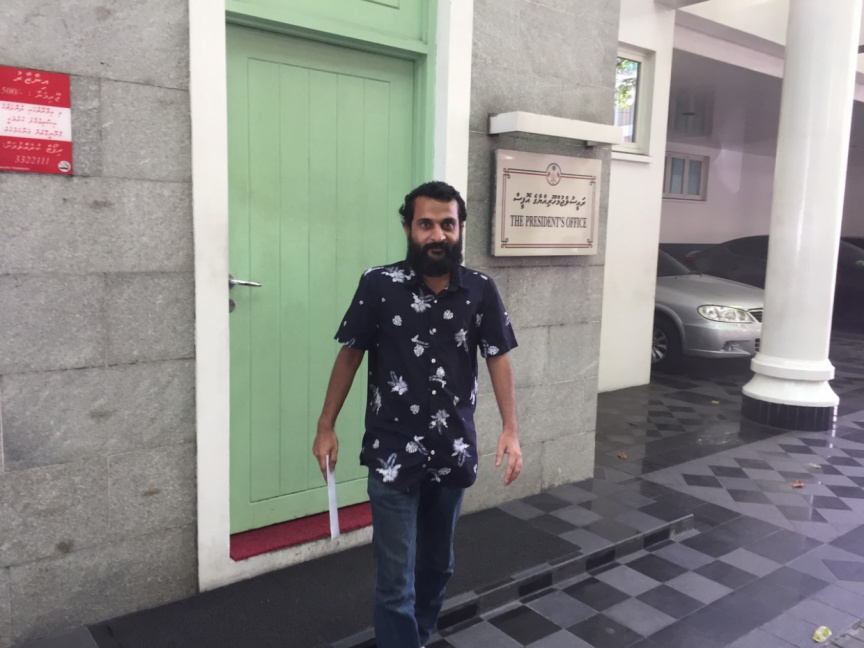 Hassan Nabah pictured outside the President's Office with his resignation letter from Maldives Broadcasting Commission (BroadCom) on June 30, 2019.

Hassan Nabah has resigned from his position as a member of Maldives Broadcasting Commission (BroadCom).

Nabah rendered his resignation to the President’s Office this Sunday morning.

The reason for his resignation is unclear at this point.

Members of the BroadCom were summoned by the Independent Institutions Committee of the Parliament last week, and questioned whether the previous administration exuded any influence on the commission.

In answer to the questions, Nabah said he shared a close personal relationship with former Vilimale’ MP Ahmed Nihan Hussain and had actively campaigned for him during the parliamentary elections. But said he had never faced any pressure from Nihan or any other politician during the course of his work.

“However, when certain people had made certain requests at certain times, I had told them that they had the legal right to file a case,” said Nabah.

Nabah’s resignation comes mere days after the resignation of Ismail Sofwan – who had resigned in face of an impending no-confidence vote against him at the Parliament.

Sofwan had not reported to work in eight months but had regularly withdrawn his salary.

In his resignation letter, Sofwan said he had been receiving a prolonged medical treatment which had prevented him from reporting to work.

“I, Ismail Sofwan, render my resignation as I have been unable to attend work due to a prolonged medical treatment, and because I believe taking consecutive medical leaves will prevent me from executing the responsibilities assigned to be by the State,” wrote Sofwan.

Sofwan, who has the most allegations of exerting political influence into the commission’s work hanging over his head, denies that he ever influenced another commission member or prioritized his personal interests during his time at BroadCom.

However, other commission members, when questioned by the Independent Institutions Committee, confirmed the allegations against Sofwan.

President of BroadCom, Mohamed Shaheeb said that Sofwan had attempted to shut down private television station, RaajjeTV, in 2018.

He said Sofwan made the attempt at direct orders from former President Abdulla Yameen Abdul Gayoom.