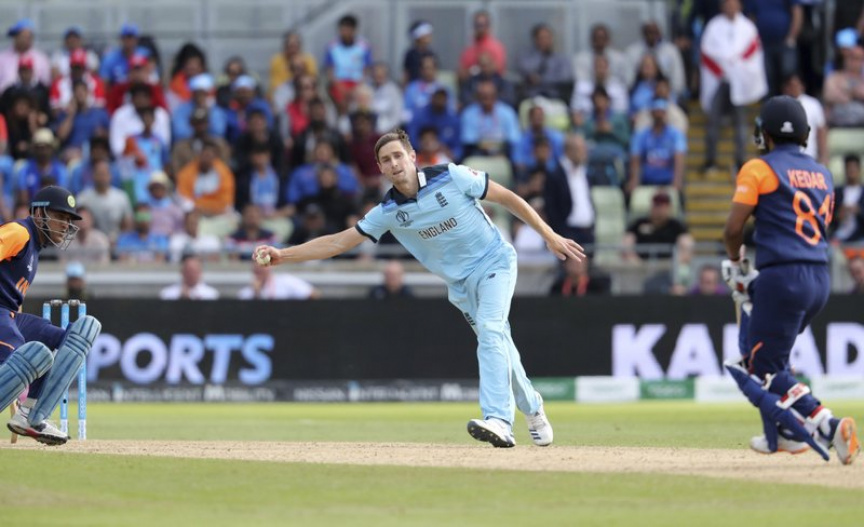 England's Chris Woakes fields off his own bowling during the Cricket World Cup match between India and England in Birmingham, England, Sunday, June 30, 2019. (AP Photo/Rui Vieira)

BIRMINGHAM, England (AP) — India played in bright orange jerseys but England shone brighter for once as the hosts revitalized their struggling Cricket World Cup campaign with a 31-run victory on Sunday.

Eoin Morgan’s team needed this win at a sunny Edgbaston to stay in control of its own fate at the tournament, and once India captain Virat Kohli departed for 66 it always looked likely England would prevail.

India, playing in an away kit to avoid a clash of colors with England, finished on 306-5 after losing the toss and watching England amass 337-7 with a first World Cup century from Jonny Bairstow (111) and Jason Roy returning from a hamstring injury with a 57-ball 66.

Bairstow was even more brutal than Roy, ending with 10 fours and six sixes, including a huge swipe in the 19th over off Kuldeep Yadav which substitute fielder Ravindra Jadeja on the boundary would not have reached with a ladder. The pair combined for 160 before Roy was out.

Bairstow had engaged in a spat with former England captain Michael Vaughan during the week, unhappy with Vaughan’s criticism of team performances. It all turned out fine according to captain Morgan.

“He likes a bit of fire in his belly, and I don’t mind that when he comes out and plays like that,” Morgan said of Bairstow. “It’s definitely a match-winning knock.”

Despite the abundance of sixes from England — 13 against just the one for India from MS Dhoni (42 not out in 31 balls) in the last over of the game — this was a more controlled aggression on show from the tournament hosts, with even dot balls often being given a good whack.

Joe Root chipped in with 44 from 54 deliveries and Ben Stokes smashed six boundaries and three sixes to lead the later charge with 79 from 54 as England, on course for a 400-plus total at one point, still managed to set India a record World Cup chase.

The chase looked huge for India but it wasn’t always comfortable for England.

Kohli was in typically superb form and shared a 138-run partnership for the second wicket with Rohit Sharma (102), who reached his century at a roughly run-a-ball rate and had hit 15 fours by that stage.

Kohli had only been dismissed once at Edgbaston in five previous innings. Make that two in six. He was out after a 76-ball innings with seven fours when he sliced the ball to substitute fielder James Vince at backward point off the bowling of Liam Plunkett (3-55).

Kohli’s loss was a significant momentum shift and eventually India lost to England at the World Cup for the first time since 1992.

India had been 28-1 after 10 overs — the slowest powerplay of the tournament — and it was too heavy a weight to carry through the innings. Hardik Pandya was threatening at the end with 45 off 33 balls but was caught by Vince off Plunkett with around five overs left and India still needing 71 to win.

Chris Woakes ended on 2-58, including three maidens, and Jofra Archer a tidy 0-45.

England returned to fourth spot in the standings on 10 points, one ahead of Pakistan. England plays 2015 finalist New Zealand in its last group game at Durham on Wednesday. Two days later Pakistan plays Bangladesh at Lord’s. It wasn’t only bad news for Pakistan. Sri Lanka can no longer advance to the last four.

India remains second with a game in hand — facing Bangladesh at Edgbaston on Tuesday and Sri Lanka on Saturday at Headingley — but Kohli’s team is no longer unbeaten.

“Every team has lost a game or two here and there. No one likes to lose but we have to take it in our stride. We have to accept it,” Kohli said. “We are still playing good cricket. The mood is the same in the changing room. We will learn from it and move forward.”

Both sides displayed brilliant fielding, collectively saving double-digit runs on the boundary, with standout catches from Jadeja to dismiss Roy and Woakes catching rookie Rishabh Pant, both fielders running and diving at speed, and pulling it off to general astonishment from fans and teammates alike.

The 338 chase wasn’t entirely unprecedented. India and England both scored 338 in a tied World Cup game at Bangalore in 2011.

The highest-successful chase remains Ireland’s 329-7 against England at Bangalore eight years ago, and the highest in this tournament is Bangladesh’s 322 against West Indies.

W. Indies has Rihanna’s support but Lanka gets the win