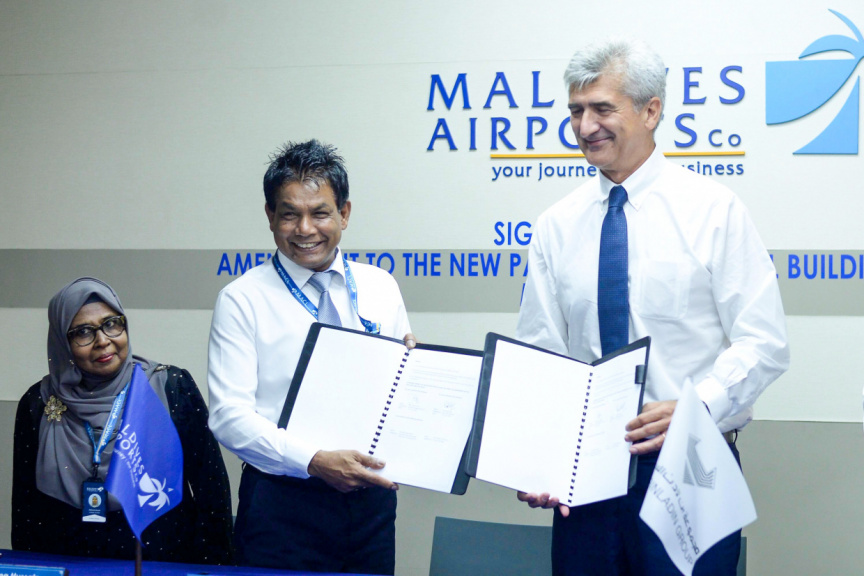 Maldives Airports Company Limited (MACL) has revised the plans for the new passenger terminal at Velana International Airport (VIA) and re–signed a construction contract with Saudi Binladin Group.

Though the new Maldivian administration had previously talked about further enlarging the planned passenger terminal, the contract signed this Thursday does not have any plans to enlarge it.

The construction contract for the passenger terminal was signed in a function held at VIA by MACL’s Acting MD Moosa Solih and Binladin Group’s CEO – International, Paolo Bigi.

The new terminal will be developed in a 73,000-square foot area at the South West of VIA.

The previous USD 350 million contract for construction of the terminal was signed with Binladin Group in 2016.

Acting MD Moosa Solih reports the project underwent such a prolonged delay due to several technical issues as well as financial constraints.

He said that the value of the project remains unchanged, and announced the expected completion time of the new terminal as by July, 2022.

Moosa Solih said the design of the terminal has been revised to incorporate traditional Maldivian accents.

He said that a Maldivian architect has been appointed to design the terminal.

The design for the new terminal will be unveiled in three months, and construction of the terminal begin in one month.

The current progress rate of completion of the new passenger terminal at VIA is at 11 percent, said Moosa Solih.