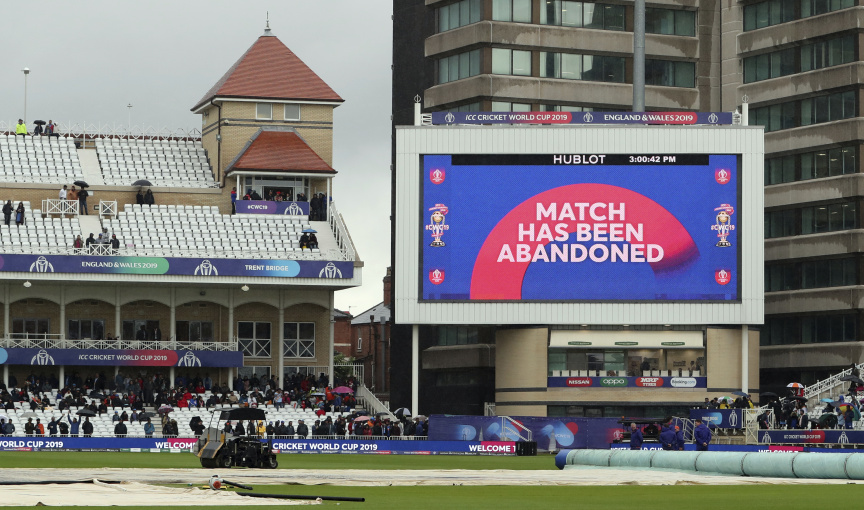 The Cricket World Cup match between India and New Zealand at Trent Bridge in Nottingham, Thursday, June 13, 2019, called off due to rain. Match abandoned without a ball bowled. (AP Photo/Rui Vieira)

NOTTINGHAM, England (AP) — India played down its abandoned match against Cricket World Cup leader New Zealand as any setback before its blockbuster showdown with Pakistan this weekend.

India and New Zealand came to Trent Bridge unbeaten and will leave unbeaten after persistent showers forced their compelling matchup on Thursday to be canceled at about 3 p.m. local time, 4 1/2 hours after its scheduled start.

The third match abandoned without a ball bowled at this World Cup, one more than in all of the 11 previous World Cups, meant India will face Pakistan on Sunday in Manchester not having played for a week. Pakistan played on Wednesday, losing to Australia.

But India captain Virat Kohli was unfazed that his side might be undercooked after only two games and two wins.

"We're playing some good cricket so we're not too worried about where we stand. Having two wins gives you that extra confidence," Kohoi said. "We will have a couple of practice sessions so we know where we are in terms of mindset and skill. We are quite ready to take that game on."

Kohli added the players are much less hyped about the match than their fans.

"The frenzy around it is a bit intimidating for the guys doing it for the first time but for us it's about being professional as always, do the basics right and look to get a result your way.

"It's an opportunity to create excitement. It's been competitive for years and it's a marquee event all over the world. It's an honor to be part of the big game and brings the best out in me."

It will be the first match between them in an ICC event since the 2017 Champions Trophy final in London, where Pakistan upset India. That's Pakistan's only win in five matches between the neighbors in four years.

With the backdrop of tensions between their countries, their matches are always the biggest in cricket in terms of the global audience.

There wasn't much of an audience at Trent Bridge on Thursday except wet fans who only had a view of a covered pitch.

India and New Zealand, the only unbeaten teams, split the competition points. Tournament leader New Zealand has 7 after four games, and India has 5 after three.

"One point is not a bad thing for sides that have won all their games so far," Kohli said.

"We would have loved to have played India," coach Gary Stead said. "They are going hot and we feel as though we are playing well, so it would have been a really nice matchup."

It's the fourth match of eight to be washed out in the past week, after two abandonments in Bristol and a rain out of the South Africa-West Indies game after 7.3 overs.

Because of the earlier abandonments, which cost Sri Lanka twice, the International Cricket Council defended there not being reserve days for rained-out games. In a group stage bloated by more than five weeks, the ICC added it was impractical to set aside reserve days as well for wet weather that has been "unseasonable."

Williamson said they had been in Nottingham for four days and not seen the sun, so the cancellation was no surprise.

While India gears up for Pakistan, the New Zealanders were relishing having the next two days off in Birmingham with their families. Then they have three more days to prepare for the winless Proteas.

"South Africa are a very good side," Williamson said. "Every time we play them it's extremely competitive. This is a good opportunity for us to get away, refresh, then get ready for that challenge."