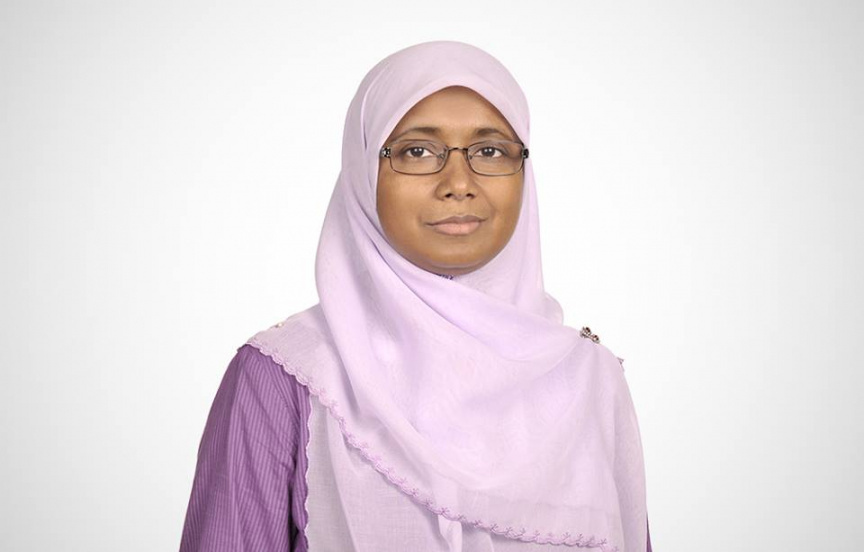 Aisha Khaleela Abdul Sattar: She has been appointed the Vice Chancellor of Islamic University of Maldives (IUM). (File Photo)

Aisha Khaleela Abdul Sattar has been appointed the Vice Chancellor of Islamic University of Maldives (IUM).

Khaleela was appointed to the position this Monday.

The appointment comes after Dr. Mohamed Shaheem Ali Saeed, incumbent President Abdulla Yameen Abdul Gayoom’s running mate for the upcoming Presidential Elections, announced that though he will retain his position as Chancellor of IUM, he will take a step back and assume an advisory role as he campaigns for the elections.

Khaleela, who has been appointed Vice Chancellor of IUM, will be in charge of running the university.

Khaleela ran for the Vaikaradhoo constituency’s seat at the People’s Majlis as the Adhaalath Party (AP)’s candidate in 2014.

Dr. Shaheem served as Vice Chancellor of IUM at its inception, while Dr. Mohamed Zahir Hussain served as the university’s first Chancellor.

Dr. Mohamed Zahir Hussain was transferred to the position of Advisor to Ministry of Education in 2016, and Dr. Shaheem was appointed the Chancellor of IUM to replace Dr. Mohamed Hussain Zahir.

Dr. Shaheem had been a key force in the inception and establishment of IUM. He had also served as Chair of the committee established by Yameen to draft the bill for the IUM.