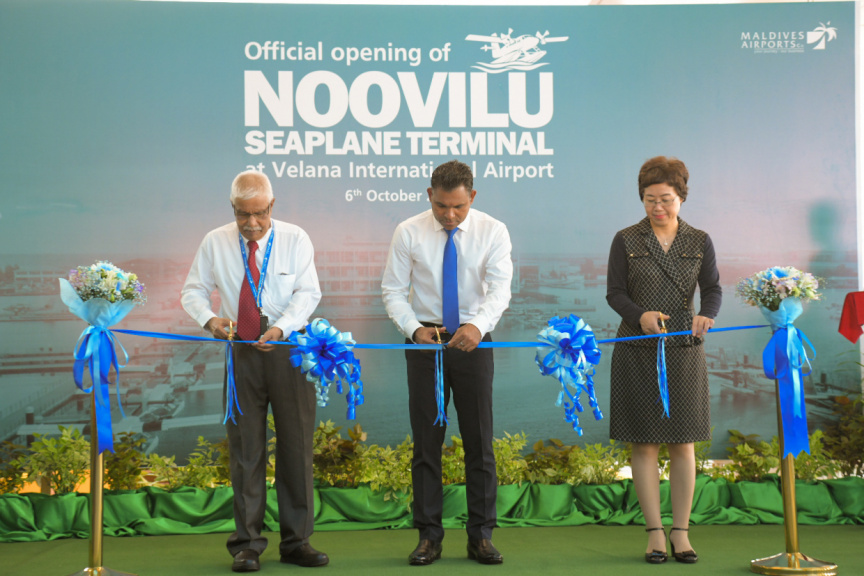 A capture from the inauguration ceremony the new seaplane terminal developed at Velana International Airport on October 6, 2022. (Sun Photo/Mohamed Hayyan)

The new seaplane terminal at Velana International Airport (VIA0 was inaugurated on Thursday.

Hailing as the largest seaplane terminal in the world - 'Noovilu Seaplane Terminal' has 42 lounges of which all except two have been leased to resorts. MACL’s ‘Vilu’ business lounge had 235 seats, whilst ‘Neeru’ lounge has 315 seats.

In addition to this new seaplane terminal, the newly developed Code F runway at VIA was also operationalized on Thursday morning with the landing of the inaugural flight. The Emirates’ aircraft had been inbound from Dubai, and upon landing was welcomed by a water salute.

Both these projects were incepted during former President Abdulla Yameen Abdul Gayyoom’s administration under an initiative to further develop the airport. The work was carried out by China’s Beijing Urban Construction Group (BUCG).

The airport development project valued at USD 800 million (MVR 12.3 billion) saw the establishment of a new VIP terminal at VIA. A new passenger terminal and a fuel farm are also being developed under the project.