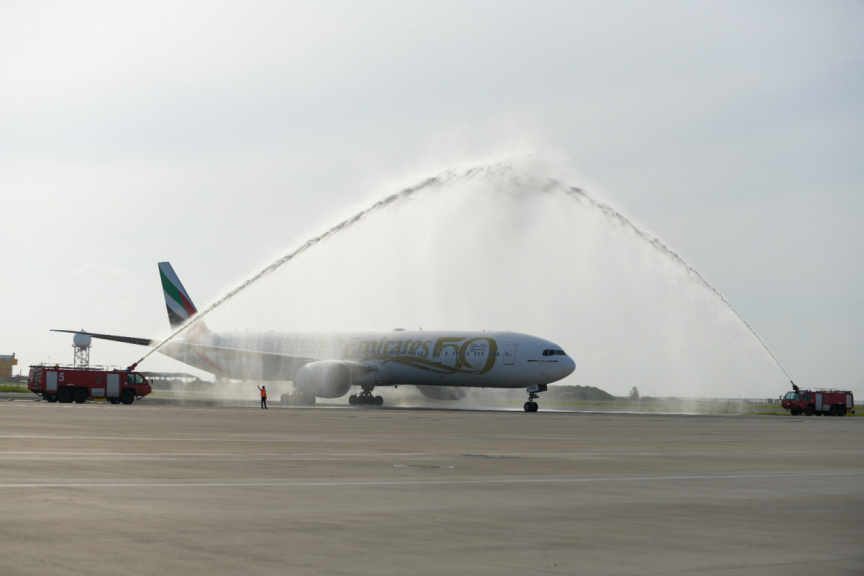 The newly developed runway at Maldives’ main gateway to the world, Velana International Airport (VIA), was brought into operation on Thursday morning.

The ceremony held at VIA to mark the opening of the new runway was officiated by Vice President Faisal Naseem. An aircraft of Emirates Airline landed at the newly developed Code F runway at VIA, effectively marking the commencement of the use of its use. The Emirates’ aircraft had been inbound from Dubai, and upon landing was welcomed by a water salute.

The new runway was brought into operation after closing the runway which had previously been in use.

This runway was developed by China’s Beijing Urban Construction Group (BUCG) during former president Abdulla Yameen Abdul Gayyoom’s administration. While physical works on the project commenced in 2017, the project was fully completed in 2018. A test flight was conducted at the runway on September 18, 2018.

Approximately USD 373 million (MVR 5.7 billion) was incurred for the development of the runway. Capable of accommodating the biggest aircrafts presently in operation across the globe, the new runway is 3,400 meters in length and 60 meters in width.

One of the most pressing concerns of airlines operating to the Maldives is respect to having to stall in air for a long time before being permitted to land, attributed to the busyness of the airport. As a result, expenses incurred for oil for aircrafts increase.

To operationalize the new runway, a movement suspension was observed at VIA starting 12:00am last night. The last aircraft to takeoff from the old runway belonged to Turkish Airlines. The old runway has ceased use after approximately 60 years.