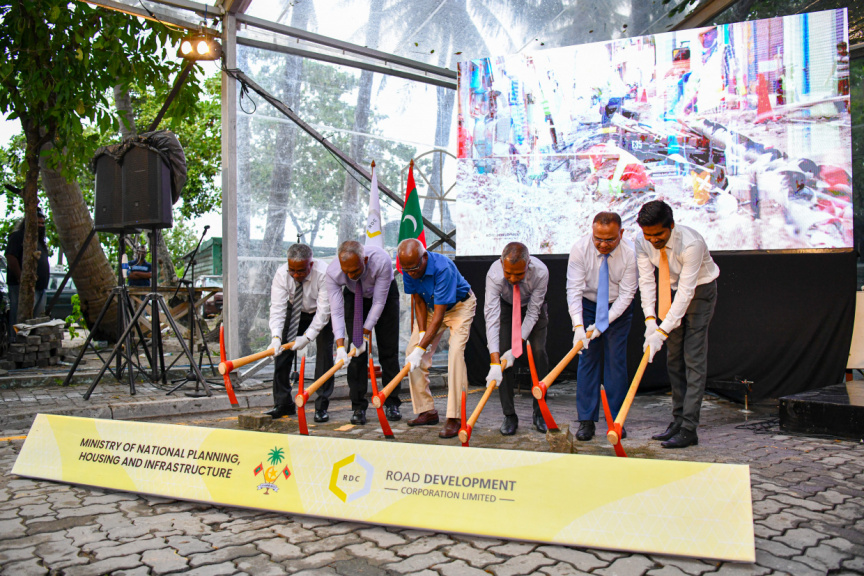 A capture from the ceremony held to mark the commencement of physical works on redevelopment of Ameenee Magu on August 30, 2022. (Sun Photo/Mohamed Hayyan)

Physical works on the redevelopment of Ameenee Magu project contracted to Road Development Corporation (RDC) by the Planning Ministry has commenced on Tuesday.

The ceremony held this evening to commence physical works on the project was special guested by former Male’ City Mayor Maizaan Ali Manik.

Speaking at the ceremony, Maizaan Ali Manik underscored the current condition of Ameenee Magu can lead to situations where people are injured, or vehicles take in damage. He also shared his views on the development of the road, whilst a major project to develop the road up to modern standard has taken off.

In this regard, he stressed that it is his request that Ameenee Magu is developed with an effective storm drain system in place, to avoid flooding. The former mayor also requested the development of pavement easily accessible to children, the elderly and others.

“It is my earnest request that the pavement is developed in a manner it is easily accessible for pedestrians. Because of the way the pavement is, many people trip and fall, resulting in injuries. It is rather common for the elderly to face such situations,” he had said.

Also speaking at the ceremony, State Minister for Planning Akram Kamaluddin pointed out that redevelopment of Ameenee Magu was contracted to RDC by the Planning Ministry outside the scope of Male’ City Scaping Project. He added that misunderstandings regarding the matter led to disagreements between Planning Ministry and Male’ City Council, which have now been solved. Subsequently, he said as all parties have now come together as one, to achieve the same goal.

“Nevertheless, today, we are with Male’ City Council, with the common goal to succeed in this project for the development of Male’,” he had said.

Speaking further, he said the main reason behind the pertinent need to redevelop Ameenee Magu was the large number of people that used the road daily, as many schools and offices are situated on the road. He added that RDC was contracted for the project, in light of their capability, and the quality they have shown in their undertakings.

The redevelopment of Ameenee Magu was contracted to RDC by Planning Ministry on July 3.

Under the project, valued at MVR 84.4 million, RDC will develop 7.1 kilometers of asphalt road, install a storm drain system, and install street lights.

The company is required to complete the project within 210 days.

Scope of the project:

The decision by the government to take the project from Male’ City Council and contract it to RDC sparked criticism. Male’ City Mayor Dr. Mohamed Muizzu warned he would lodge a case with the Anti-Corruption Commission (ACC), alleging the decision involved corruption