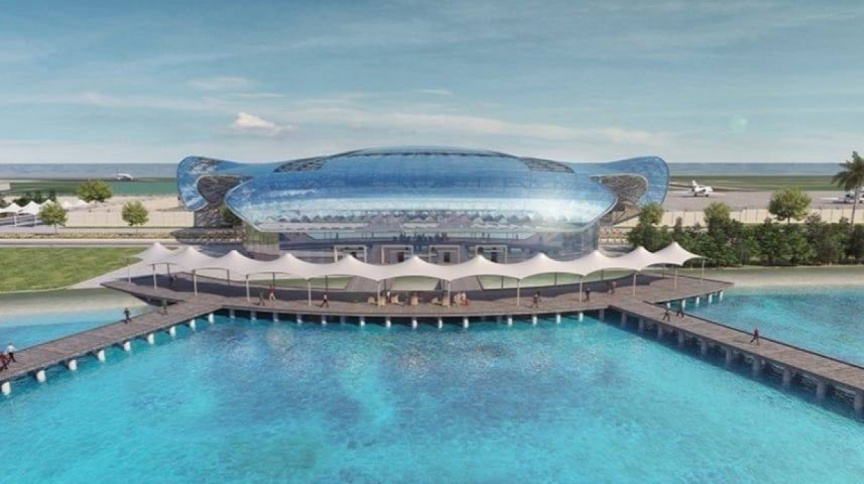 Following the completion of the bidding process for the development of Hanimaadhoo International Airport – the project has been officially awarded to the winning bidder, India’s JMC Projects Limited on Wednesday.

The project was contracted for USD 136.6 million.

The project financed by Line of Credit from India’s EXIM Bank executed between the Government of Maldives the Bank in 2019 – which comprises of a scope if a 2.46 kilometre new runway and a terminal with an annual capacity of 1.3 million passengers.

Other facilities required to expand international travel will also be developed under the project.

Economic Ministry revealed that by the end of the project, the airport will be able to accommodate large commercial aircrafts including Airbus A320s and Boeing 737s. The airport will also provide a direct getaway for flights from South Asia, Southeast Asia and East Africa.

The Ministry said that one of biggest obstructions to develop tourism in northern Maldives is the lack of an airport handling operations of direct flights carrying tourists from different regions of the world and the expenses tourists must bare to travel to the northern Maldives.

Therewith, the Ministry stressed that completion of Hanimaadhoo International Airport will provide a permanent solution for the issue - which will also lead to development of new resorts, city hotels and guesthouses in the north, ultimately improving tourist.

Furthermore, the Ministry highlighted that the project would create additional business and employment opportunities in the north.

In this regard, the Ministry detailed that when the airport is brought into operation – many direct and indirect jobs will be created. Apart from this, the airport will also ease direct import of goods to the north – which will enhance businesses the economies of northern islands.

The Ministry also said that establishment of a quality international airport at Hanimadhoo will open doors for companies to purchase fish and export them freshly, particularly yellow-fin tuna exporting companies.

Apart from this, the Ministry said that development of Hanimaadhoo Airport as a modern international will aid in the government’s plans to establish northern Maldivian as a maritime hub for major cargo boats travelling through world’s main shipping routes.

Development of Hanimadhoo International Airport is one the most important projects initiated by the administration of President Ibrahim Mohamed Solih.

The government has previous stated that project is an important one being carried out under its policy to develop northern Maldives as main economic hub.

Economic Ministry said that physical works on the project is expected to commence during the last quarter of this year – whereas the airport will reach completion and begin operations in 2024.