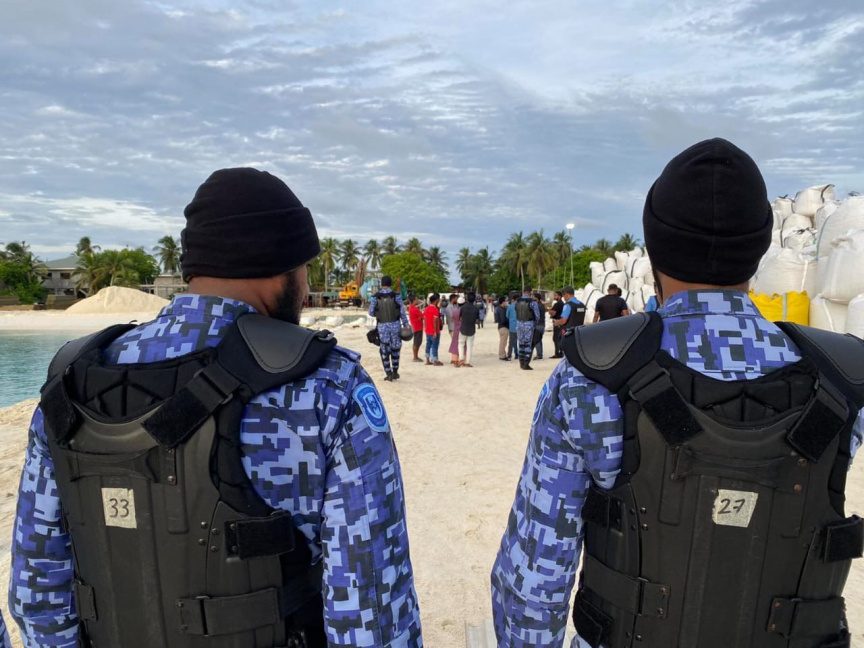 Police officers are pictured with expatriate workers on B. Bodufinolhu on July 23, 2020. Around 15 locals were taken hostage by a group of 200 migrants over unpaid wages. (Photo/PSM)

Employment Tribunal has ordered RIX Private Limited to pay the pending salaries of migrant workers that were employed by the company for the development of a tourist resort at B. Bodufinolhu.

In a statement released by their legal representative, Public Interest Law Centre (PILC) on Thursday, they detailed that Employment Tribunal had ruled on Wednesday to award a total of MVR 41,000 per worker – including pending 5 months’ salary of MVR 35,000 (MVR 7,000 each month) and MVR 6,000 as food allowances.

The Tribunal had ordered RIX Private Limited to settle the payment within 45 days.

In the wake of the violence in Bodufinolhu, police launched an investigation into RIX on suspicion of “exploitation and forced labor of migrant workers, facilitating human trafficking, failure to pay fees and payments entitled to the State on behalf of the migrant workers and violation of the rights of migrant workers”.

The company’s managing director, Milandhoo MP Ali Riza, admitted to failing to pay workers four months of wages, which he said was due to financial constraints due to the COVID-19 pandemic.