Bodufinolhu expats were threatened of deportation 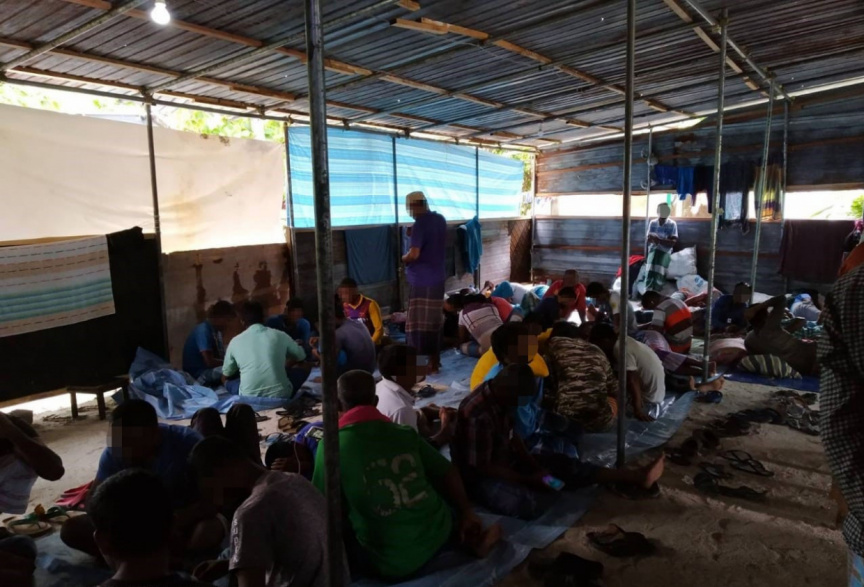 One of the 19 arrested due to the Bodufinolhu unrest has said that a senior official of Seal Maldives, the developer of the project, threatened to deport the expatriates without paying their wages.

The unrest in B. Bodufinolhu was over unpaid wages and involved expatriates damaging property and vandalizing equipment and vehicles at the location. A number of locals were also taken hostage by the expatriates who numbered around 200.

A special operation of police and MNDF was commenced in order to quell the unrest after initial attempts by police to land on the island were faced with a violent response from the expatriates. Some police officers also suffered injuries during the ordeal.

The contractor and the developer of the island are also involved in a spat over the payment of wages. Neither company involved admit that it was their responsibility to pay the wages.

The expatriate that disclosed the threats was speaking with his lawyer who in turn, issued a statement regarding the matter.

Attorney Aminath Nashaa Adhil who met with her client yesterday said that the senior official who threatened to do so is named Mohamed Idhrees.

“The Maldivians in the location were there for them (expatriates). Seal Maldives had threatened them before, so if the locals departed from the island, there would be no safety for them.” Said Nashaa.

The expatriate said that when a supervisor of Rix Maldives named as Nattu, the contractor departed from the island, the official from Rix Maldives had reportedly told the expatriates that “Your boss has departed. You have no power on this island. Now we will deport you without your salaries.”.

The expatriate had said that a gang had tried to land on the island afterward and were warded off by the expatriates who were protecting themselves.

The expatriates then saw another group of people trying to land on the island at night and thought that they were the same individuals from the gang who tried to attack them earlier. The expatriates attacked for their safety believing so.

“Later they realized, that the second attempt was by police. They did not stop any further attempts by police to land on the island afterward.”

Nineteen individuals were arrested on July 2 due to the unrest. The arrested individual that spoke with the lawyer, also said that he was instructed to sign papers at the remand hearing without the appointment of a translator. He said that the events of Bodufinolhu were also detailed during the hearing.

“The issue of a remand hearing of expatriates being conducted without the appointment of a translator is to be submitted to the Judicial Service Commission (JSC).” Said that attorney. The expatriates also expressed concern over the possibility that the alleged senior official of Seal Maldives that threatened to do so was left free to tamper evidence.

The actions of police regarding the matter are also to be presented to the Parliament and Human Rights Commission.

The Managing Director of Rix Maldives who are the contractor of the project, MP for Milandhoo Ali Riza, later on, admitted that the migrants were owed four months of wages.

Nashaa also questioned whether the matter could proceed in the B. Atoll judicial administration in a fair and unbiased manner since the owners of Seal Maldives, the developer of the island of Bodufinolhu were from the region. She also said that previous accounts of threats of violence by the businessman have been reported and gone unaddressed by the police in the region.