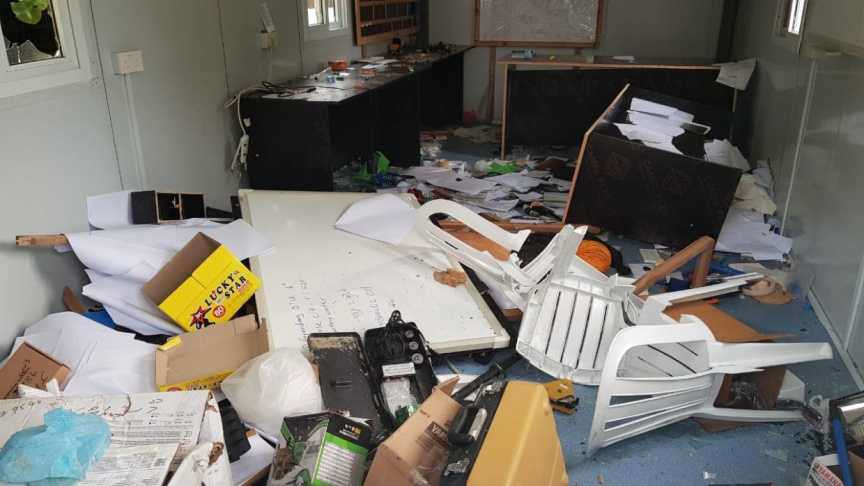 An office located in B. Bodufinolhu ransacked in a violent strike staged by disgruntled migrant workers on July 2, 2020. (Photo/Maldives Police Service)

B. Eydhafushi Magistrate Court, on Saturday, ordered 19 migrant workers arrest for the violent strike in B. Bodufinolhu to be remanded in custody of the police for 15 days.

The police, in a statement, said the suspects were presented before the Eydhafushi Magistrate Court for their remand hearing on Saturday, and that the court has granted the police 15 days to keep the suspects detained for the investigation in a detention facility determined by the Home Affairs Ministry.

The 19 migrant workers were arrested from Bodufinolhu, an island under development as a tourist resort, on Friday.

They were arrested following a violent strike over months of unpaid salaries on Thursday, during which some of the 203 disgruntled migrant workers at the island destroyed property and held local employees hostage.

One of the hostages was rescued by police after he escaped the hostage-takers and jumped into the lagoon between Bodufinolhu and neighboring B. Thulhaadhoo on Thursday night, while the other 12 hostages were rescued by a team of police officers led by the Specialist Operations Department that was deployed from the capital, Male’ City, in the early hours of Friday.

The police said the disgruntled migrant workers showed no resistance to the police team which went to Bodufinolhu on Friday. The team was accompanied by two officials from the Bangladeshi High Commission, who assisted in the negotiations which led to the peaceful surrender of the migrant workers.

However, several police officers sustained injuries in an earlier attempt to intervene, when disgruntled migrant workers threw rocks and iron rods at an approaching police boat.

Managing Director of Rix Maldives, the contractor of the resort development project in Bodufinolhu, Milandhoo MP Ali Riza has stated that the workers have not been paid their salaries in four months. He said that the company had been unable to pay the salaries due to the coronavirus crisis.

Both the contractor and the developer, Seal Maldives, continue to shift blame on each other over the unpaid salaries.

Meanwhile, a team from Public Interest Law Center, which has pledged pro-bono legal counsel to the migrant workers in Bodufinolhu, arrived at the island on Saturday. They have set up a temporary desk to provide consultation and free legal aid to the workers.

The team is accompanied by officials from the Bangladeshi High Commission to assist in translation services.