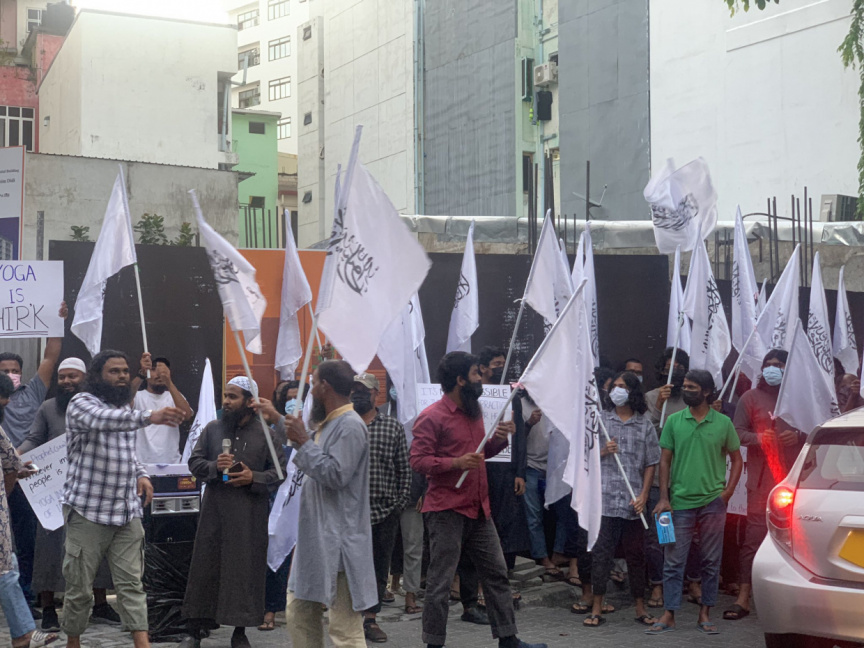 A group of men protest against a Yoga Day event in Male' City on June 21, 2022. (Photo/Twitter/Shiuna)

Islamic Ministry has appealed to the public not to fall victim to insincere activities held for political benefit under the ruse of defending Islam and Prophet Mohamed.

Islamic Ministry made the appeal in a statement in response to the mob attack on the International Day of Yoga event held at the national football stadium on Tuesday morning.

The event, organized by the Indian Cultural Center and the Sports Ministry, was attended by dozens of participants, including foreign ambassadors and diplomats.

Six suspects were arrested in connection to the incident.

Islamic Ministry said that certain individuals were manipulating the love Maldivians had for the religion of Islam to serve a political purpose and inciting hate and anger within the community.

Islamic Ministry described the mob attack on the yoga event as an “uncivilized and lowly act”.

Acts that call for violence and create fear goes against the very principles of Islam, said the ministry.

Islamic Ministry urged Islamic scholars and relevant institutions to be more attentive to such matters, and prioritize the interests of the community.

Meanwhile, Elections Commission has issued a statement warning any political party found to have been involved in the mob attack would be penalized.