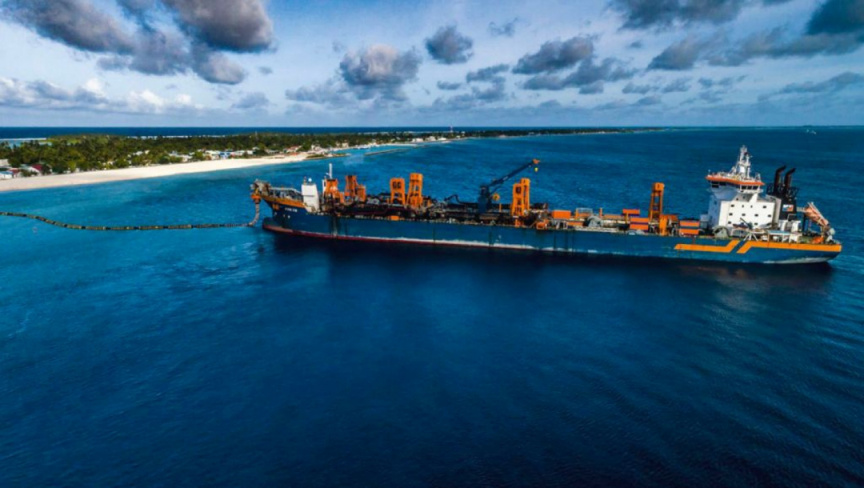 Planning Minister Mohamed Aslam told the Parliament on Tuesday that the land reclamation project in Addu City was going ahead as scheduled.

Aslam, who was summoned to the Parliament on Tuesday morning, made the statement in response to a question by Maradhoo MP Ibrahim Shareef.

Aslam said that the contractor was currently engaged in the work required prior to mobilization.

“There are some things that need to be done prior to mobilization. This includes finalizing the EIA. Usually, there are certain approvals that need to be obtained once a contract is signed. And a sand search will be conducted,” he said.

Aslam said that once the work is done, the locations from which and the quantities in which sand can be dredged from Addu will be identified.

Aslam said that though it took time to sign the contract, the project was now going ahead as scheduled.

Van Oord, the Dutch company that was contracted the project back in March, has stated it plans on bringing in its HAM 318 dredger for the project.

The company also said it will complete the project in 18 months.

194 hectors of land will be reclaimed in Addu under the project. The project also involves coastal protection of a 11 kilometer area.

Under the project, 90 hectors of land will be reclaimed in Hithadhoo, 23.3 hectors in Hulhumeedhoo, 76 hectors in Maradhoo and Maradhoo Feydhoo, and uninhabited islands for tourism.